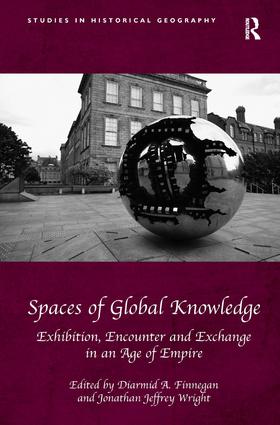 Exhibition, Encounter and Exchange in an Age of Empire, 1st Edition

’Global’ knowledge was constructed, communicated and contested during the long nineteenth century in numerous ways and places. This book focuses on the life-geographies, material practices and varied contributions to knowledge, be they medical or botanical, cartographic or cultural, of actors whose lives crisscrossed an increasingly connected world. Integrating detailed archival research with broader thematic and conceptual reflection, the individual case studies use local specificity to shed light on global structures and processes, revealing the latter to be lived and experienced phenomena rather than abstract historiographical categories. This volume makes an original and compelling contribution to a growing body of scholarship on the global history of knowledge. Given its wide geographic, disciplinary and thematic range this book will appeal to a broad readership including historical geographers and specialists in history of science and medicine, imperial history, museum studies, and book history.

’If there is one thing that this remarkable collection makes crystal clear, it’s that movement is fundamental to making knowledge. Whether it’s about ideas or images, specimens or species, texts or things, the generation of knowledge at any one site requires the circulation of items among many sites. This set of essays thus wonderfully demonstrates just how that troubled article, global knowledge�, was actually made through encounters in particular places, collections of particular items, and the circulation of particular texts. Spaces of Global Knowledge takes us on a journey that shows, for once and for all, that if there ever was such a thing as an ivory tower� or a brain in a vat� it only existed as a momentary halt in a dynamic global communication network. An altogether exhilarating excursion.’

’What did it mean to make global knowledge� during the long nineteenth century’s age of empire, industrialism, exploration and exhibition? At the cutting edge of historical geography’s encounter with histories of knowledge, the essays in this collection examine the spatial practices, power relations and communicative forms involved in making, circulating, displaying and debating a dizzying range of ways of knowing the nineteenth-century globe from natural history to demography, ocean science and medicine. Together they confirm not a singular global history of knowledge but the fruitful multiplicity of its historical geographies.’

'The variety of methodologies expertly employed is refreshing and makes the collection a useful primer for students but also an instructive resource for experts in any of the ?elds included. It is a self-aware collection determined to provoke questions and un-dermine assumptions about how knowledge is formed across boundaries, a goal it achieves admirably.'

'Spaces of Global Knowledge is the latest instalment in the Studies in Historical Geography Routledge series, edited by Robert Mayhew. This volume is an ambitious collection of essays, which neatly weaves together a number of seemingly disparate case studies to create something that both illustrates and challenges what it means to think geographically about how global knowledge was made during the long nineteenth century.'

Matthew Goodman, University of Glasgow, British Journal for the History of Science

'This edited collection embraces and seeks to interrogate the ubiquitous yet vague terms of ‘global’ and ‘knowledge’. The authors offer a variety of methodological and interdisciplinary approaches to understanding where, how, and why global knowledge was created in the long nineteenth century. Together, the essays show-case the elasticity of the term ‘global’ in critical historical analysis while also cautioning scholars against its overuse or its con?ation with related terms such as ‘empire’.'

Historical geography has consistently been at the cutting edge of scholarship and research in human geography for the last fifty years. The first generation of its practitioners, led by Clifford Darby, Carl Sauer and Vidal de la Blache presented diligent archival studies of patterns of agriculture, industry and the region through time and space. Drawing on this work, but transcending it in terms of theoretical scope and substantive concerns, historical geography has long since developed into a highly interdisciplinary field seeking to fuse the study of space and time. In doing so, it provides new perspectives and insights into fundamental issues across both the humanities and social sciences. Having radically altered and expanded its conception of the theoretical underpinnings, data sources and styles of writing through which it can practice its craft over the past twenty years, historical geography is now a pluralistic, vibrant and interdisciplinary field of scholarship. In particular, two important trends can be discerned. First, there has been a major 'cultural turn' in historical geography which has led to a concern with representation as driving historical-geographical consciousness, leading scholars to a concern with text, interpretation and discourse rather than the more materialist concerns of their predecessors. Secondly, there has been a development of interdisciplinary scholarship, leading to fruitful dialogues with historians of science, art historians and literary scholars in particular which has revitalised the history of geographical thought as a realm of inquiry in historical geography. Studies in Historical Geography aims to provide a forum for the publication of scholarly work which encapsulates and furthers these developments. Aiming to attract an interdisciplinary and international authorship and audience, Studies in Historical Geography will publish theoretical, historiographical and substantive contributions meshing time, space and society.