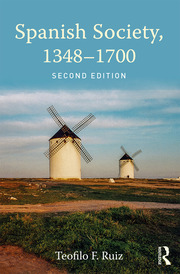 Beginning with the Black Death in 1348 and extending through to the demise of Habsburg rule in 1700, this second edition of Spanish Society, 1348–1700 has been expanded to provide a wide and compelling exploration of Spain’s transition from the Middle Ages to modernity.

Each chapter builds on the first edition by offering new evidence of the changes in Spain’s social structure between the fourteenth and seventeenth century. Every part of society is examined, culminating in a final section that is entirely new to the second edition and presents the changing social practices of the period, particularly in response to the growing crises facing Spain as it moved into the seventeenth century. Also new to this edition is a consideration of the social meaning of culture, specifically the presence of Hermetic themes and of magical elements in Golden Age literature and Cervantes’ Don Quijote.

Through the extensive use of case studies, historical examples and literary extracts, Spanish Society is an ideal way for students to gain direct access to this captivating period.

Preface to the second edition

Introduction: from medieval to early modern

PART ONE: THE GEOGRAPHY AND POLITICAL SETTING

1 The Making of Spain

PART TWO: A SOCIETY OF ORDERS

PART FOUR: CULTURE AND SOCIETY IN AN AGE OF DECLINE

11 Spain under the late Habsburgs: Society in an age of crisis I

12 Spain under the late Habsburgs: Society in an age of crisis II

Teofilo F. Ruiz is Professor of History at the University of California, Los Angeles. His previous publications include A King Travels: Festive Traditions in Late Medieval and Early Modern Spain (2012), Spain, 1300-1469: Centuries of Crises (2007), Medieval Europe and the World (2005) and From Heaven to Earth: The Reordering of Castilian Society, 1150–1350 (2004).

"Spanish Society combines up to date scholarship with accessible readibility for students. Teo Ruiz's use of vignettes makes of this book a handy resource while covering themes familiar to historians of Spain' s Golden Age. The topical rather than chronological lay out of Spanish Society enables instructors to craft their courses in multiple ways. Still, the intellectual depth of Spanish Society provides for stimulating classroom dialogue. As such, Ruiz's textbook has no parallel."