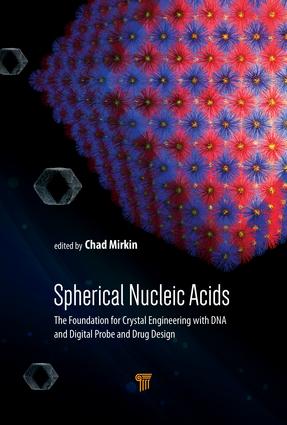 Edited by Chad A. Mirkin

Spherical nucleic acids (SNAs) comprise a nanoparticle core and a densely packed and highly oriented nucleic acid shell, typically DNA or RNA. They have novel architecture-dependent properties that distinguish them from all other forms of nucleic acids and make them useful in materials synthesis, catalysis, diagnostics, therapeutics, and optics/plasmonics. This book covers over two decades of Dr. Mirkin’s research on SNAs and their anisotropic analogues, including synthesis and fundamental properties, and applications in colloidal crystallization, adaptive matter, and nanomedicine, spanning extra- and intracellular diagnostics, gene regulation, and immunomodulation. It is a reprint volume that compiles 101 key papers from high-impact journals in this research area published by the Mirkin Group at Northwestern University, Illinois, USA, within the International Institute for Nanotechnology, and collaborators. Volume 1 provides an overview and a historical framework of engineering matter from DNA-modified constructs and discusses the enabling features of nucleic acid–functionalized nanomaterials. Volume 2 covers design rules for colloidal crystallization, building blocks for crystal engineering, and DNA and RNA as programmable bonds. Volume 3 discusses colloidal crystallization processes and routes to hierarchical assembly, dynamic nanoparticle superlattices, surface-based and template-confined colloidal crystallization, optics and plasmonics with nanoparticle superlattices, and postsynthetic modification and catalysis with nanoparticle superlattices. Volume 4 covers diagnostic modalities, and intracellular therapeutic and diagnostic schemes based upon nucleic acid–functionalized nanomaterials.

“This book comprehensively covers the wide scope of areas in which spherical nucleic acids have an impact and brilliantly and seamlessly spans areas of fundamental science, materials science, and clinical applications, including both diagnostics and therapeutics. It is truly a tour de force in both breadth and depth, and the richness of the materials science covered in these volumes is staggering. This book is an essential resource for physical scientists, life scientists, and health professionals.” -David R. Walt, Harvard Medical School, USA

“This book contains a wealth of information on one of the most prominent nanostructures in the era of modern nanoscience and technology—the spherical nucleic acid. These comprehensive volumes, part historical perspective and part scientific reference, are fully essential for any researcher who wants to understand this fascinating nanoarchitecture and how it is changing the world.” - Timothy M. Swager, Massachusetts Institute of Technology, USA

“This is an excellent and very thorough book on an extremely novel class of nucleic acids called spherical nucleic acids, which have very interesting and unique properties and uses. The editor, Chad Mirkin, a world-renowned scientist, is the person who pioneered this entire field.” - Robert S. Langer, Massachusetts Institute of Technology, USA