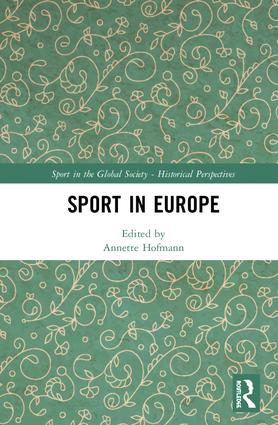 This book presents an overview on sport history research in Europe by giving insights into various topics between Europe´s south and north. Examples are physical activities in the middle ages in Córdoba, bullfighting in Spain, aspects of football in various countries to winter sports in France. Football is mainly looked at in the period of the late 1930s to the 1940s, a period of dictatorship in many European countries. This is shown at the example of the German press coverage of German–Danish sport collaborations and the identity of Spanish football during this time.

A further focus are the Olympic Games. This topic is taken up in two articles: One discusses as its main subject the famous painting 'Sport Allegory/The Crowing of the Athletes' created by the father of Pierre de Coubertin, the other one has a more current content and shows stakeholders and challenges of the European Youth Olympics in 2015.

Besides these broad topics, a focus is put on research in sport history by reflecting on historical frameworks and various methodological approaches.

The chapters in this book were originally published as a special issue in The International Journal of the History of Sport.

2. Art Works as Sources for Sport History Research: The Example of ‘Sports Allegory/ The Crowning of the Athletes’ by Charles Louis Frédy de Coubertin

4. Sport Versus Bullfighting: The New Civilizing Sensitivity of Regenerationism and its Effect on the Leisure Pursuits of the Spanish at the Beginning of the Twentieth Century

5. Football with Friends? How the German Sporting Press Covered the German–Danish Sports Collaboration, 1939–1944

6. Between Survival Strategy and Bloody Violence: Boxing in Nazi Concentration and Extermination Camps (1940–1945)

7. Reshaping Spanish Football Identity in the 1940s: From Fury to Tactics

8. How the Touring Club de France Influenced the Development of Winter Tourism

9. Stakeholders, Challenges and Issues at a Co-Hosted Youth Olympic Event: Lessons Learned from the European Youth Olympic Festival in 2015

Annette R. Hofmann, Professor for Sports Studies at the Ludwigsburg University of Education in Germany, and head of the sport department. President of the International Society for the History of Sport and Physical Education (ISHPES) and Vice President of the German Gymnastic Federation (Deutsche Turner-Bund). Academic Editor Europe of the IJHS. Main research areas in sport history: German–American Sports, Gender and Sport, History of Skiing.