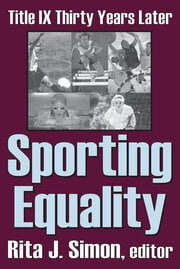 As part of its Education Amendments, the United States Congress passed Title IX in 1972 to ensure that no person should be discriminated against in any education program or activity receiving federal financial assistance. In the decades since, Title IX has had, among other effects, a marked increase on school athletic programs for women and girls at both the high school and college level. Despite this, a range of questions have been raised about the effectiveness of the federal government's enforcement, and also the impact on male athletics. The government can enact legislation, but how it works remains the domain of administrators at one end and thousands of athletes at the other. Sporting Equality reviews the impact of Title IX thirty years after its passage, and suggests future areas of contention.

This new title includes the major findings and recommendations of the Secretary of Education's Commission on Opportunities in Athletics established in 2002, as well as the commission's minority report. These contributions are followed by seven chapters that analyze and assess the strength and weakness of Title IX and offer recommendations for strengthening or changing its goals and objectives. These include: Kimberly A. Yuracko, "Title IX and the Problem of Gender Equality in Athletics"; Eric C. Dudley, Jr. and George Rutherglen, "A Comment on the Report of the Commission to Review Title IX"; Barbara Murray, "How to Evaluate the Implementation of Title IX at Colleges and Universities and Attitudes and Interest of Students Regarding Athletics"; John J. Cheslock and Deborah Anderson, "Lessons From Research on Title IX and Intercollegiate Athletics"; Valerie M. Bonnette, "The Little Fusses Over Title IX."

The book concludes with two controversial chapters. The first, by Leo Kocher, argues that Title IX has been detrimental to male athletics, especially gymnastics, swimming, wrestling, and track, while the second by Ellen J. Staurowsky claims that Title IX has not gone far enough in providing women athletes with the equality they deserve. This volume will be of interest to specialists in the sociology of sports, women's studies scholars, and sports educators.