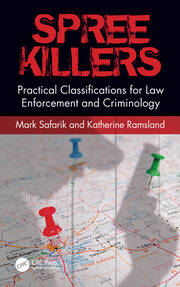 Spree Killers: Practical Classifications for Law Enforcement and Criminology is the only exhaustive, up-to-date analytical book on spree killers, standing apart from those dedicated to mass murderers and serial killers.

Multicides have traditionally been categorized as double, triple, mass, serial and spree—while, mass and serial have been further divided into subcategories. Spree killing, which involves the killing of at least three persons at two or more locations due to a precipitating incident that fuels the urge to kill, remains a poorly defined concept.  In the United States, the Federal Bureau of Investigation (FBI) eliminated this term from its multicide nomenclature in 2005, but the authors examination of 359 cases involving 419 spree killers from 43 countries shows that not only is there enough diversity among spree killers to form classifications—similar to those devised for mass and serial—but also that subtypes offer distinct utility for identification, tracking, and warning potential targets.

outline the designation of spree killer specifically and thoroughly. In addition to looking at existing literature, specific cases, and the behavioral patterns, it offers a fully worked up profile for the typology. The behaviors and motives for spree killers align in six categories, which are detailed in full. The book provides unique insight for police, forensic, and investigative personnel into what to look for to respond to, and—in some cases identify and stopping—certain types of spree killings.

is a professor of forensic psychology at an assistant provost at DeSales University in Pennsylvania. She has published over 1,000 articles, stories, and reviews, and 65 books, including The Psychology of Death Investigation, Forensic Investigation: Methods from Experts, Confession of a Serial Killer: The Untold Story of Dennis Rader, the BTK Killer; The Mind of a Murderer; The Forensic Science of CSI; Inside the Minds of Serial Killers, and The Forensic Psychology of Criminal Minds. She presents workshops to law enforcement, psychologists, coroners, and attorneys, and has consulted for several television series, including The Alienist, CSI and Bones. She writes a regular blog for Psychology Today and has appeared in more than 100 crime documentaries.

was a member of the Federal Bureau of Investigation’s elite Behavioral Analysis Unit. He established himself as an internationally recognized expert in the analysis of violent criminal behavior. Safarik’s law enforcement career spans over 30 years. He served 23 years with the FBI, the last 12, as a criminal profiler. He has lectured around the world, sharing his expertise in the analysis of homicide and complex crime scene behavior with over 20,000 personnel from police chiefs to violent crime investigators, prosecutors, medical examiners and other professionals. He currently consults with law enforcement, attorneys, universities, writers, television producers, and foreign government entities. Safarik has a graduate degree from Boston University and is adjunct faculty at Boston College. He has conducted internationally renowned research on the sexual assault and homicide of elder females and received the prestigious Jefferson Medal from the University of Virginia. He is a member of the highly respected Vidocq Society. He has published articles, and book chapters on his research and work. He has appeared on numerous television programs to discuss his cases and analyses. He has three cold case television series both in the US and Europe. He has been a consultant for the television series CSI: Las Vegas, Bones, and The Blacklist.

"Spree Killers: Practical Classifications for Law Enforcement and Criminology does a great service by calling attention to a little-recognized subtype of multiple homicide and making suggestions for proactive measures to ... serve as a catalyst for further study and encourage the formulation of protocols for anticipating and dealing with spree killings."— George R, Dekle, Sr., Lead prosecutor in the Orlando Ted Bundy murder trial; Author of The Last Murder: The Investigation, Prosecution, and Execution of Ted Bundy (From the Foreword)