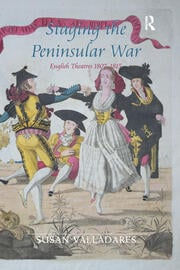 From Napoleon's invasion of Portugal in 1807 to his final defeat at Waterloo, the English theatres played a crucial role in the mediation of the Peninsular campaign. In the first in-depth study of English theatre during the Peninsular War, Susan Valladares contextualizes the theatrical treatment of the war within the larger political and ideological axes of Romantic performance. Exploring the role of spectacle in the mediation of war and the links between theatrical productions and print culture, she argues that the popularity of theatre-going and the improvisation and topicality unique to dramatic performance make the theatre an ideal lens for studying the construction of the Peninsular War in the public domain. Without simplifying the complex issues involved in the study of citizenship, communal identities, and ideological investments, Valladares recovers a wartime theatre that helped celebrate military engagements, reform political sympathies, and register the public’s complex relationship with Britain’s military campaign in the Iberian Peninsula. From its nuanced reading of Richard Brinsley Sheridan's Pizarro (1799), to its accounts of wartime productions of Shakespeare, description of performances at the minor theatres, and detailed case study of dramatic culture in Bristol, Valladares’s book reveals how theatrical entertainments reflected and helped shape public feeling on the Peninsular campaign.

"In this groundbreaking investigation of theatrical engagements with the anti-Napoleonic campaigns in Spain and Portugal, Valladares brings to life a multifaceted panorama in which writing, performance, spectatorship, history and politics converge into a fascinating intersection of forms of visuality and spectacularity. Drawing upon innovative archival research, this study confirms the centrality of theatre and the impact of Iberian cultures in early nineteenth-century Britain. Valladares’s carefully researched and convincingly argued volume is an invaluable contribution to the study of the politics of the early nineteenth-century stage and, more generally, to the fields of Romantic Anglo-Hispanic and Anglo-Portuguese Studies." -- Diego Saglia, University of Parma, Italy

"Susan Valladares’ Staging the Peninsular War: English Theatres 1807-1815 is, by a considerable margin, an original contribution to knowledge. It opens up a new set of previously neglected perspectives on this significant aspect of the Napoleonic war and parades the vigour of theatrical responses to it…The rich body of material identified for the first time by Valladares in Staging the Peninsula War considerably re-balances our picture of theatre in wartime Britain." --David Worrall, Nottingham Trent University/University of Roehampton, The Review of English Studies

"This richly documented and informative study accomplishes precisely what the title promises: a thorough examination of how Napoleon’s invasion of Portugal led to Britain’s military intervention in Spain and Portugal, and how back in Britain the Peninsular War excited a high degree of public interest reflected not only in newspapers and periodicals, but also in the theatres of the metropolis and the provinces." -- Frederick Burwick,University of California, Los Angeles, The BARS Review

"While the span of years that her