Star Power
American Democracy in the Age of the Celebrity Candidate 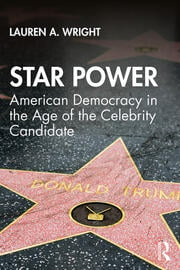 Star Power: American Democracy in the Age of the Celebrity Candidate

Are celebrity politics the spice of American public life or a pox on policy progress? This book identifies and measures the attributes of celebrities that make them well-equipped to win campaigns and yet poorly prepared to govern effectively. The framers of the U.S. Constitution worried about the propensity of an undereducated public to elect unqualified entertainers rather than fit characters to government positions. Celebrities have come to play an increasingly central role in the American political process as fundraisers, surrogates, and as candidates themselves, yet remain a sorely understudied topic in political science. Through a multimethod approach that includes qualitative analysis, novel public opinion surveys, and survey experiments, this book assesses whether Americans are more likely to vote for celebrities than well-known traditional politicians and the implications of these preferences for democracy in the U.S. Perfect for students, scholars, and interested citizens, Star Power looks at the contemporary American political landscape through new lenses of research as well as popular appeal.

1. A Short History of a Longstanding Obsession

2. In Their Own Words: Why Celebrities Run

Dr. Lauren A. Wright is a Lecturer in Politics and Public Affairs at Princeton University, where she teaches courses on The Presidency and Executive Power, Women and Politics, and Political Communication. Wright is also the author of On Behalf of the President: Presidential Spouses and White House Communications Strategy Today (Praeger, 2016). Wright is a contributor to The Hill and The Huffington Post and her writing has frequently appeared in The Washington Post. Her commentary has also been featured in The Chicago Tribune, The Denver Post, The Houston Chronicle, Newsweek, The New York Daily News, The San Francisco Chronicle, USA Today, and US News and World Report. She is a frequent guest political analyst and has appeared on CNN, C-SPAN, Fox News, and MSNBC. Wright’s research interests include presidential politics, public opinion, and public and private sector communications strategy. She currently serves as Strategic Communications Director at NV5 Global, Inc. (Nasdaq: NVEE) and is a board member of The White House Transition Project. Wright received a Ph.D. in Government from Georgetown University in 2014. Before that, she was a Field Representative for Meg Whitman’s campaign for governor of California.

"Lauren Wright has written a timely and important book. A reality game show host is in the Oval Office amid speculation of other glitterati considering a challenge. Wright raises the critical question of whether the skills of celebrities have any relevance to those required for political leadership and governance. A Princeton University lecturer, she combines the rigorous research of an academic intellectual with a keen understanding of practical politics gleaned from her participation and earlier writings. This is must reading for anyone interested in political leadership today." - Albert R. Hunt, former Washington Bureau Chief and Executive Editor of The Wall Street Journal and Bloomberg News

"It was perhaps inevitable that in a culture as obsessed with celebrity as ours, we would someday end up with one in the White House. Is Donald Trump an aberration and a corrective, or a sign of things to come? Lauren Wright explores how the world of politics and celebrity have become so intertwined, and where this may be taking us." - Karen Tumulty, Columnist, The Washington Post

"Lauren Wright has written the opening salvo to the age of celebrity politics. Set within a historic framework, her study combines her own research, scholarly literature, and astute analysis to warn Americans of the very dangers the framers feared when they created the US Constitution: demagoguery, ill-informed decision making, and self-interested, autocratic rule. Who's to blame and what do we do about It? Read Wright's innovative, well written and thought-provoking book to find out." - Stephen J. Wayne, Georgetown University

"Donald Trump wasn’t the first celebrity to win an election, and he won’t be the last. Lauren Wright helps explain why celebrities run for office and why many voters will support them. Her conclusion is a troubling one: Celebrities have the tools to entertain voters, but not the tools to govern effectively. This is a timely and important book." - John Sides, George Washington University