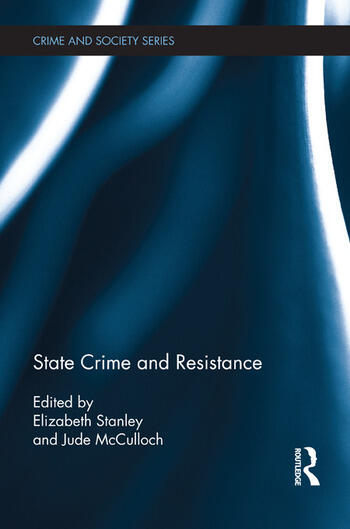 Within criminology ‘the state’ is often ignored as an active participant, or represented as a neutral force. While state crime studies have proliferated, criminologists have not paid attention to the history and impact of resistance to state crime. This book recognises that crimes of the state are far more serious and harmful than crimes committed by individuals, and considers how such crimes may be contested, prevented, challenged or stopped.

Gathering together key scholars from the UK, USA, Asia, Australia and New Zealand, this book offers a deepened understanding of state crime through the practical and analytical lens of resistance. This book focuses on crimes ranging from gross violations of human rights (such as genocide, war crimes, mass killings, summary executions, torture, harsh detention and rape during war), to entrenched discrimination, unjust social policies, border controls, corruption, fraud, resource plunder and the failure to provide the regulatory environment and principled leadership necessary to deal with global warming.

As the first to focus on state crime and resistance, this collection inspires new questions as it maps the contours of previously unexplored territory. It is aimed at students and academics researching state crimes, resistance, human rights and social movements. It is also essential reading for all those interested in joining the struggles to champion ways of living that value humanity and justice over power.

Elizabeth Stanley is a Senior Lecturer at the School of Social and Cultural Studies at the Victoria University of Wellington, NZ. Jude McCulloch is Professor of Criminology at Monash University, Australia.

'...This book is the first to offer an introduction to the important topic of resisting state crime. Taking on an unexplored topic within the state crime literature, this edited volume should be considered a required foundational text for all those, students and scholars alike, wanting to better understand the dynamics between state and resistance.'— Victoria E. Collins, PhD. Assistant Professor, School of Justice Studies, Eastern Kentucky University