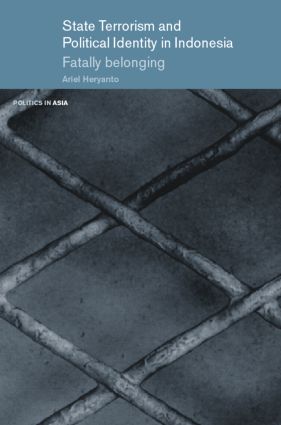 Approximately one million innocent Indonesians were killed by their fellow nationals, neighbours and kin at the height of an anti-communist campaign in the mid-1960s. This book investigates the profound political consequences of these mass killings in Indonesia upon public life, highlighting the historical specificities of the violence and comparable incidents of identity politics in more recent times.

Mixing theory with empirically based analysis, the book examines how the spectre of communism and the trauma experienced in the latter half of the 1960s remain critical in understanding the dynamics of terror, coercion and consent today. Heryanto challenges the general belief that the periodic anti-communist witch-hunts of recent Indonesian history are largely a political tool used by a powerful military elite and authoritarian government. Despite the profound importance of the 1965-6 events it remains one of most difficult and sensitive topics for public discussion in Indonesia today. State Terrorism and Political Identity in Indonesia is one of the first books to fully discuss the mass killings, shedding new light on a largely unspoken and unknown part of Indonesia’s history.

"Heryanto's analysis of power is subtle and original, informed by both a deep knowledge of recent events in Indonesia and an admirable familiarity with social theory…this book succeeds in transcending customary analytical frameworks. It is a valuable book that should be a central reference point for any debate about Indonesia's post-1965 politics."--Pacific Affairs, Vol 79 No 1, Spring 2006

"Combining sophisticated use of social theory with the extended analysis of a case study and a variety of materials from popular culture, Ariel presents a thesis that should be of great interest to anyone who seeks to understand contemporary Indonesian political culture."--Bulletin of Indonesian Economic Studies, Vol 42 Issue 3, December 2006

"State Terrorism and Political Identity in Indonesia provides an insightful look at one of the crucial memories of Indonesia as a nation-state, and Heryanto is very comprehensive in exploring both empirical and theoretical angles"--The Jakarta Post, November 12, 2006

"A profoundly important book for anyone wanting to understand Indonesia today"--Tapol, Vol 184, October 2006

"Heryanto's book … will, in time, be recognized as pathbreaking. It is a must-read for anyone concerned about Indonesia, comparative politics, as well as those interested in how poststructuralism, in hybrid form, may be employed in sociopolitical analysis." Rommel A. Curaming (La Trobe University) Kasarinlan, 2007 22 (2):142-7.

"[the author] has a knack of unpicking theory, and herein lies the beauty of the book. Heryanto opts for gentle evocation by backlighting a series of texts and images, which he documents with precision and holds to be telling of New Order simulacral teror and its contestations. He guides the reader into Indonesian politics, as if into a jungle, demonstrates the value of exploring it from the perspective of popular practice" Emma Baulch (Inside Indonesia, 92: Apr-Jun 2008)

"Ariel's knowledge of and insights into Indonesian popular culture add depth and specificity to his theorising, and give his book unparalleled authority." Janet Steele (George Washington University) The Bulletin of Indonesian Economic Studies (BIES), 2006, 42 (3): 405-6.

"Heryanto has long been one of the most theoretically challenging, original and stimulating scholars writing on Indonesian politics, and this book is the culmination of his work so far." Edward Aspinall (Australian National University) Asian Studies Review, 2007, 31 (2): 205-6.

Ariel Heryanto is a Senior Lecturer at Melbourne Institute of Asian Languages and Societies, The University of Melbourne. His research interests include cultural studies, media and identity politics. He co-edited Challenging Authoritarianism in Southeast Asia: Comparing Indonesia and Malaysia (RoutledgeCurzon, 2003).