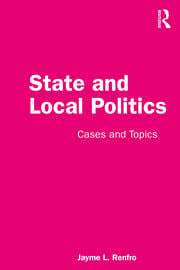 This book is the first of its kind to take concepts directly from the most commonly used textbooks in state and local politics and apply them directly to current events. It presents twelve chapters of case studies, richly detailing key topics ranging from how the comparative method can be used to understand the similarities and differences between diverse places, to a look at how state governments have taken the lead on COVID-19, environmental policy, civil rights, gun control, college tuition regulation, cybersecurity and elections, sex offenders, and many more subjects of contemporary interest. It devotes a complete chapter to local-level politics in Nevada, Florida, and Iowa, and wraps up with a unique chapter on regional governance bridging between states and localities. This detailed and highly readable book is designed to complement traditional state and local textbooks. It is also of interest to students of public administration, public policy, urban politics, and intro to American politics.

Borders and BBQ: KCK and KCMO and the Dividing Lines of Government and Culture

Georgia on My Mind

Using the Laboratories of Democracy to Keep People Healthy

Hurricanes, Floods, and Tornados Oh My! The High Cost of Disaster Recovery

Federal Ownership of Land, or, When Nevada isn’t Actually Nevada

Problems in Euclid and the Limitations of the Ohio Constitution

From Plastic Bags to Guns: Preemption Laws and an Evolving Political Landscape

Is Grandpa Bankrupting your City? A Look at Debts and Liabilities

Isn’t that Their Job? How State Legislatures End Up Not Passing Budgets

Cybersecurity and Election Systems: When Is It Time to Panic?

Is the Internet a Tool or a Distraction for Increasing Political Participation?

A Two-Party System Requires Two Parties: Democrats in the South

ALEC and the Use and Misuse of Model Bills

When It All Goes Wrong: The Impeachment of Governor Robert Bently and Eric Greitens

Can a State Make a Difference on Environmental Policy?: California is Giving it a Shot

Judicial Recall: How the Brock Turner Case Turned California on its Head

Selling Beer to Alcoholics: The Nebraska State Supreme Court and the Whiteclay Problem

Interesting Work, Good Benefits, and Job Security: Why Work for the Government?

Bureaucrat Bashing in the Era of Civil Service Shame

Verruckt and the Case for Increased Government Regulation of Amusement Parks

Handling an "Alien" Invasion in a Small Desert Town

Postville, IA: A Town Recovers from a Major Immigration Raid

Tiebout Gets Schooled: The Indirect Benefits of Public Schools on Community Satisfaction

Jayme L. Renfro is an Associate Professor of Political Science at the University of Northern Iowa. She enjoys teaching public policy and administration to both undergraduate and graduate students and has earned university- and college wide teaching awards. She is co-author, with Kevin B. Smith, of State and Local Government 2013-2014. She enjoys books, her husband, travelling, playing darts, her children, cake, and naps (not in that order).

"A lively and comprehensive set of readings that cover all the key elements of state politics. The topics are carefully selected and the essays engaging—highly recommended."
Kevin B. Smith, University of Nebraska—Lincoln

"This book is an uncommonly witty and lively examination of state and local government. These enjoyable case studies will engage every reader."
John C. LePete, Palo Alto College

"This timely volume provides a focused analysis on the most pressing issues facing state and local governments, applying the latest in political science and public policy research to ongoing social problems. The applied nature of the content as well as the end of chapter discussion questions make this a valuable resource for students and faculty."
Christopher W. Larimer, University of Northern Iowa