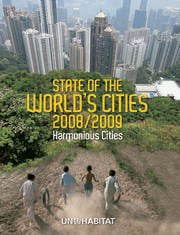 Cities are perhaps one of humanity's most complex creations, never finished, never definitive. They are like a journey that never ends. Their evolution is determined by their ascent into greatness or their descent into decline. They are the past, the present and the future. Cities contain both order and chaos. In them reside beauty and ugliness, virtue and vice. They can bring out the best or the worst in humankind. They are the physical manifestation of history and culture and incubators of innovation, industry, technology, entrepreneurship and creativity. Cities are the materialization of humanity's noblest ideas, ambitions and aspirations but when not planned or governed properly, can be the repository of society's ills. Cities drive national economies by creating wealth, enhancing social development and providing employment but they can also be the breeding grounds for poverty, exclusion and environmental degradation.

The 21st Century is the Century of the City. Half of humanity now lives in cities, and within the next two decades, 60 per cent of the world's people will reside in urban areas. How can city planners and policymakers harmonize the various interests, diversity and inherent contradictions within cities? What ingredients are needed to create harmony between the physical, social, environmental and cultural aspects of a city and the human beings that inhabit it? This report adopts the concept of Harmonious Cities as a theoretical framework in order to understand today's urban world, and also as an operational tool to confront the most important challenges facing urban areas and their development processes. It recognizes that tolerance, diversity, social justice and good governance, all of which are inter-related, are as important to sustainable urban development as physical planning. It addresses national concerns by searching for solutions at the city level. For that purpose, it focuses on three key areas: spatial or regional harmony, which examines the main drivers of urban growth in the developing world and explores the spatial nuances of economic and social policies; social harmony, which presents and analyzes new data on urban inequalities worldwide and describes the types of shelter deprivations experienced by slum dwellers in developing world regions; and environmental harmony, which examines the role of cities in the climate change debate, and the impact of global warming on the most vulnerable cities. The report also assesses the various intangible assets within cities that contribute to harmony, such as cultural heritage, sense of place and memory and the complex set of social and symbolic relationships that give cities meaning. It argues that these intangible assets represent the soul of the city and are as important for harmonious urban development as tangible assets. Harmony within cities, argues the report, is both a journey and a destination.