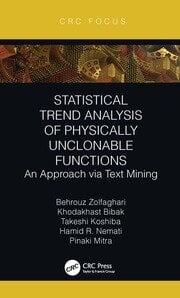 Physically Unclonable Functions (PUFs) translate unavoidable variations in certain parameters of materials, waves, or devices into random and unique signals. They have found many applications in the Internet of Things (IoT), authentication systems, FPGA industry, several other areas in communications and related technologies, and many commercial products.

Statistical Trend Analysis of Physically Unclonable Functions first presents a review on cryptographic hardware and hardware-assisted cryptography. The review highlights PUF as a mega trend in research on cryptographic hardware design. Afterwards, the authors present a combined survey and research work on PUFs using a systematic approach. As part of the survey aspect, a state-of-the-art analysis is presented as well as a taxonomy on PUFs, a life cycle, and an established ecosystem for the technology. In another part of the survey, the evolutionary history of PUFs is examined, and strategies for further research in this area are suggested.

In the research side, this book presents a novel approach for trend analysis that can be applied to any technology or research area. In this method, a text mining tool is used which extracts 1020 keywords from the titles of the sample papers. Then, a classifying tool classifies the keywords into 295 meaningful research topics. The popularity of each topic is then numerically measured and analyzed over the course of time through a statistical analysis on the number of research papers related to the topic as well as the number of their citations.  The authors identify the most popular topics in four different domains; over the history of PUFs, during the recent years, in top conferences, and in top journals. The results are used to present an evolution study as well as a trend analysis and develop a roadmap for future research in this area. This method gives an automatic popularity-based statistical trend analysis which eliminates the need for passing personal judgments about the direction of trends, and provides concrete evidence to the future direction of research on PUFs. Another advantage of this method is the possibility of studying a whole lot of existing research works (more than 700 in this book).

This book will appeal to researchers in text mining, cryptography, hardware security, and IoT.

Khodakhast Bibak is an Assistant Professor at the Department of Computer Science and Software Engineering at Miami University. Previously, he was a Postdoctoral Research Associate (September 2017 - August 2018) in the Coordinated Science Laboratory at the University of Illinois at Urbana-Champaign. Before this, Khodakhast was a Postdoctoral Research Fellow (May-August 2017) at the Department of Computer Science, University of Victoria, from where he also received his PhD (April 2017). He earned a Master of Mathematics degree (April 2013) at the Department of Combinatorics and Optimization, University of Waterloo, where he was also a member of the Centre for Applied Cryptographic Research (CACR). Khodakhast’s research interests are Cybersecurity, Applied Cryptography, Information Theory, Communications, Quantum Information Science (QIS), and related areas.

Takeshi Koshiba received the PhD degree from Tokyo Institute of Technology. He is a full professor at the Department of Mathematics, the Faculty of Education and Integrated Arts and Sciences, Waseda University, Japan. His interests include theoretical and applied cryptography, the randomness in algorithms, and quantum computing and cryptography.