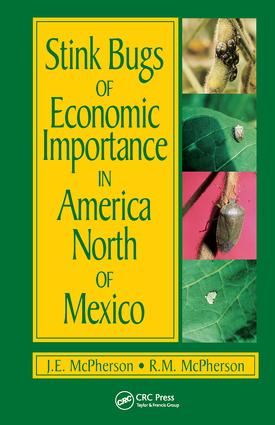 Stink Bugs of Economic Importance in America North of Mexico

Many scientists have reported an extensive amount of information on the biology, life history, and damage potential of stink bugs. However, this information is scattered among numerous journals, periodicals, and other publications. Stink Bugs of Economic Importance in America North of Mexico brings together the applied and nonapplied literature in one complete and concise format.

The book gives you:

Written by two top-notch researchers whose experience is complementary, the book examines these constant pests. The first comprehensive resource on this fascinating and destructive group of insects, Stink Bugs of Economic Importance in America North of Mexico provides you with a reference that you can use in the laboratory or in the field for easy identification of pentatomids.

"Stink Bugs of Economic Importance in America North of Mexico was written for those interested in stink bug management including extension professionals, crop consultants, and producers who deal with them as pests on a regular basis."

"In summary, this book is a valuable source of information for both researchers and educators who are interested in pestiferous pentatomids….It also should be valuable to those crop consultants who are dealing with stink bugs on a regular basis. … for those interested in owning an information source that captures current knowledge of stink bug pests in major crops, its price is a bargain."