Story and Simulations for Serious Games
Tales from the Trenches 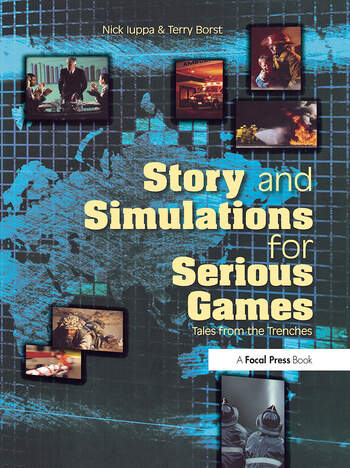 Story and Simulations for Serious Games: Tales from the Trenches

How to create a simulation where participants have a sense of freedom and personal control while still maintaining the structure necessary for an effective story is a difficult task indeed. This book examines how to create an engaging, effective story (necessary to teach participants), while relating practical considerations of building a simulation. It also looks at stories as classic ways of teaching and gathering knowledge and considers other theories of interactive narrative design such as synthetic story creation and management and participant-generated story experiences. It also discusses enabling technologies in artificial intelligence, synthetic characters design and development, speech recognition technology, 3D modelling, and the future of story-driven games. Story Driven Simulations reviews the existing efforts in this field as well as focusing on the recent efforts of Paramount Pictures and The Institute for Creative Technologies at the University of Southern California, where this expert author team created successful simulations for the U.S. Army, Department of Defense, as well as other educational simulations.

INTRODUCTION:(Dramatic example of the benefits of story driven simulations from the recent work Paramount has done for the United States Army); PART ONE: STORIES;1. The Value of Stories(What is a story, how is it different from an events list and what benefits does it bring to simulations);2. Back-story and Free-play(The current story-game model);3. Poetry and Hollywood(Classic story structures from Aristotle to Darryl F. Zanick); 4. War Stories and Parables (Stories and their use in learning); 5. Tacit Knowledge and Expectations (The theory behind story-based learning); PART TWO: CHARACTERS; 6. Characters (The importance of characters in stories and their value to simulations);7. Creating Multi-Dimensional Characters (Techniques for making sure characters have dimension, including the use of character bibles, and other devices that strengthen and differentiate characters and their motivation).; 8. Unique Uses of Characters in Story Driven Simulations Pedagogical and dramatic roles that characters can play in the service of the story); PART THREE: STORY STRUCTURE CASE STUDIES; 9. Case Study: Interactive High Noon (Classic example of structure, story and virtual free play); 10. Storylines for Collaborative Distance Learning (Review of the principles used to develop collaborative distance learning for the US Army by Paramount and the Institute for Creative Technologies at USC); 11. Branching Storylines: The New Paradigm (Review of the principles of branching storylines based on a new paradigm); 12. Stories In Commercial Games (The back story and the ongoing story as used in commercial games, their value and effect on massively multiplayer games, PC games and console games; the consequences of their use in commercial game design, other ways of thinking about stories within commercial games); PART FOUR: GAME DESIGN; 13. Establishing Dramatic and Pedagogical Goals (Establishing goals and objectives for dramatic and learning simulations); 14. Organizing Events Into Storylines (How to assemble teaching points in such a way that they form a meaningful and coherent story in which the entire experience serves the critical objective of the lesson); 15. Designing The Arc Of The Game Story (Ordering the teaching points and tying them together so that the simulation story builds through a classic dramatic arc); 16. Describing Expected Participant Performance (Defining the path that the participants are expected to take through the simulation story); 17. Expectation Violations(Methods for dealing with violations to the path that participants are expected to take in order to allow the story to stay on track in spite of participant interactions); PART FIVE: EXPERIENCE MANAGEMENT; 18. The Dungeon Master & Game Manager(The classic role from D & D games, translating the dungeon master into massively multiplayer games); 19. The White Cell (How the Army manages simulation games); 20. Man in the Loop - The Instructor As Dungeon Master (The pedagogical implications of the dungeon master role when taken on by an instructor); 21. The Automated Story Manager (The possibilities of performing some content-based game management with artificial intelligence); 22. Liquid Narrative (Automated story generation); PART SIX: BUILDING THE IMMERSIVE ENVIRONMENT; 23. Overview (The advantages and disadvantages of different forms of media as carriers of game content); 24. Game Play (The most critical element in all games is the game play itself. Selecting media formats and delivery platforms based on game play, paying attention to game play, testing for game play, revising games for guaranteed effective game play.); 25. 3D Virtual Worlds (Building the virtual environment, constructing the space, the characters, the staging, skills required, degree of difficulty); 26. Immersive Desktop Experiences (Multi-media experiences that simulate computer based systems operation. Example: the Navy's use of computers and multi-media in a closed system to link ships around the world in a war game simulation played out entirely through the ship's communication systems.); 27. Interactive Video And Television (How media elements can be used to create interactive characters and allow motion through a video based immersive environment instead of creating a graphics based 3D world; the coming promise of interactive television); 28. The Internet(Ways in which delivery over the Internet enhances and detracts from game delivery); 29. Audio(The critical role of audio in building and maintaining the virtual world, Pre-recorded audio vs. synthetic speech, the importance of music and sound effects.); PART SEVEN: STORY DEVELOPMENT CASE STUDIES; 30. Case study in Branching Storylines(Review of the story development process as exemplified in the Leaders project jointly developed for the US Army by Paramount and USC);31. Case study in Collaborative Distance Learning (Review of the story development process as exemplified in the ALTSIM project jointly developed for the US Army by Paramount and USC);32. Case study in Story Driven Simulations(Review of the story development process as exemplified in the Crisis Decision Exercise designed for the Industrial College of the Armed Forces by the Paramount.); PART EIGHT: THE FUTURE OF DISTANCE LEARNING; 33. The Role Of Story In Building Immersive Distance Learning Experiences; 34. Techniques For Collaborative Simulations; 35. Evaluation Techniques For Distance Learning Simulations; PART NINE: THE FUTURE OF STORY DRIVEN GAMES; 36. On-Line Collaborative Games; 37. Story Driven Massively Multiplayer Games; 38. Location Based Entertainment; 39. Probabilities Of Success.; CONCLUSION

Terry Borst is a Writers Guild of America member with credits in feature films, episodic television, and videogames, including the award-winning WING COMMANDER III and WING COMMANDER IV, and Microsoft's space adventure game FREELANCER. He has also taught screenwriting and multimedia design at UCLA, USC, the College of Santa Fe, the Banff Centre for the Arts, Moorpark College and various conferences and workshops.

"How to create a simulation where participants have a sense of freedom and personal control while still maintaining the structure necessary for an effective story is a difficult task indeed. This book examines how to create an engaging, effective story (necessary to teach participants), while relating practical considerations of building a simulation. - Tech Trends, April 2007