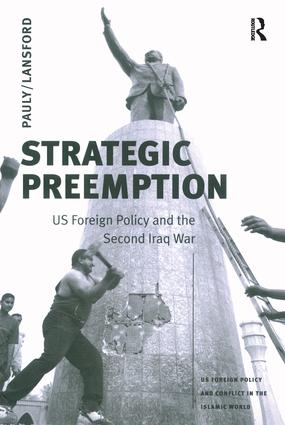 US Foreign Policy and the Second Iraq War, 1st Edition

Placing the second US-Iraq conflict in the context of emerging trends in international relations, this exceptional, timely volume examines the broad framework of US policy toward Iraq under the administration of George W. Bush. The Second Iraq War marks the third time since 1991 that the United States has invaded a Muslim country, and this book details not only the specifics of the conflict, but the war's broad impact on US relations with Muslim states, both in a regional and global context. It analyzes the development of the previous US policy of containment to the new doctrine of preemption. The volume also: ¢ Examines the linkages between Al Qaeda's attacks on the United States on 11 September 2001 and the prosecution of the Second Iraq War. ¢

Prize: Winner of a Choice Outstanding Academic Title Award 2006 ’…a very timely and useful book…Indeed, the authors' clear writing and well-honed arguments make an informative read for the interested public as well. This concise book offers a surprisingly comprehensive view of contemporary US national security policy…a well-organized summary and analysis of US national security policy. In sum, I highly recommend this valuable contribution to twenty-first century national security studies.’ Greg Granger, Associate Professor, Northwestern State University of Louisiana, USA 'Pauly and Lansford have written an excellent and timely examination of the US intervention in Iraq that should become a standard introduction to the second Gulf War…As a history of US policies toward Iraq, the book is a first-rate reference useful to students and policy makers alike…Highly recommended.' Choice 'This is a succinct but authoritative treatment of the evolving nature of the newly announced (2002) US policy of pre-emptive first strike…a quite useful supplement for the array of courses emphasizing national security, foreign policy and international relations.' American Society of International Law Newsletter

Contents: Introduction: the legacy of the past; US Iraq policy and September 11; The doctrine of preemption; Diplomacy and brinkmanship; A coalition of the willing; Operation Iraqi Freedom; Rebuilding and reconstruction; Conclusion: the future of US Iraq policy; Bibliography; Index.

The proliferation of an anti-US ideology among radicalized Islamic groups has emerged as one of the most significant security concerns for the United States and contemporary global relations in the wake of the end of the Cold War. The terrorist attacks of September 11, 2001 demonstrated the danger posed by Islamic extremists to US domestic and foreign interests. Through a wealth of case studies this new series examines the role that US foreign policy has played in exacerbating or ameliorating hostilities among and within Muslim nations as a means of exploring the rise in tension between some Islamic groups and the West. The series provides an interdisciplinary framework of analysis which, transcending traditional, narrow modes of inquiry, permits a comprehensive examination of US foreign policy in the context of the Islamic world.