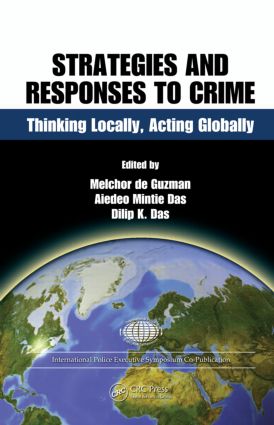 Strategies and Responses to Crime

Every year, esteemed scholars and practitioners meet at the International Police Executive Symposium to discuss contemporary issues in policing and share ideas about effective strategies in their jurisdictions. Drawn from the proceedings at the Thirteenth Annual Meeting held in Turkey and updated with new developments since the conference, Strategic Responses to Crime: Thinking Locally, Acting Globally describes how local police agencies are addressing issues of crime that have global implications.

With contributions from a diverse panel of experts, the book combines scholarly perspectives with those of practitioners and explores issues in various cultural settings worldwide. Topics discussed include:

Combining empirical evidence from scholarly studies with in-the-trenches experience from practitioners, this volume assembles critical insight into a range of issues relevant to policing in the 21st century.

Strategic Responses to Crime: Thinking Locally, Acting Globally edited by Melchor de Guzman is a wide-ranging volume that combines the perspectives of both scholars and police executives from around the globe, including chapters focused on both emerging and established democratic societies. The volume covers important global innovations in community policing, emerging transnational issues, such as drug trafficking and terrorism, and the use of information in police agencies, among other issues of importance to anyone interested in a global perspective on policing. This volume would make an excellent supplement to any course on policing, providing students with a broader perspective than is typically presented in most textbooks.

Analyzing the Implementation and Evolution of Community Policing in the United States and Scandinavia;James F. Albrecht

2010! But Is Anyone Counting?Terry G. Coleman

A Law Unto Themselves: An Insight Into the Human Rights Watch Report on the Indian Police; K. S. Subramanian