Stricken
Voices from the Hidden Epidemic of Chronic Fatigue Syndrome 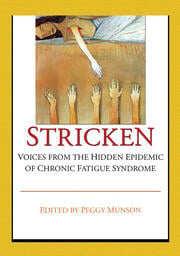 Stricken: Voices from the Hidden Epidemic of Chronic Fatigue Syndrome

Develop a better understanding of what CFS/CFIDS sufferers are going through!In the 1980s, a strange emerging epidemic baffled doctors in Incline Village, Nevada. Dismissed by the media as “The Yuppie Flu,” Chronic Fatigue Immune Dysfunction Syndrome (CFIDS) turned out to be neither a faddish disease of the wealthy nor a passing trend, but rather a growing worldwide epidemic of devastating proportions.In the voices of a South African journalist, a former marathon runner, a teenage girl, a public health activist living on the edge of race and gender, a cancer patient neglected by doctors because of disdain for her chronic illness, and a theologian relearning the art of spiritual empathy, the people who share their stories in Stricken: Voices from the Hidden Epidemic of Chronic Fatigue Syndrome defy cultural stereotypes and explore the complex social and political dynamics of this hidden epidemic. Through their distinct points of view, we feel the grief and hope of those stricken with CFIDS and learn of the complex nature of this misunderstood disorder. These are compelling stories about a quiet and baffling epidemic. The first American anthology to contain stories from a diverse range of people with CFIDS, Stricken offers an intimate look at the political and social issues surrounding CFIDS, as told by those who are living through this ordeal. Stricken addresses several issues, such as:

Stricken confronts fascinating CFIDS issues such as the Kevorkian suicides, accusations of Munchausen Syndrome By Proxy, Gulf War Syndrome, the role of storytelling in a memory-impaired patient movement, and the feasibility of mass activism in a disabled population. With contributions from Pulitzer-prize nominated writer Susan Griffin, renowned health writer and radio host Gary Null, well-known feminist activist Joan Nestle, and award-winning poet and essayist Floyd Skloot, Stricken is an eloquent testament to the heroism, defiance, and diversity of the CFIDS community.