Student Resistance
A History of the Unruly Subject 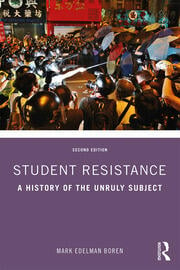 Student Resistance: A History of the Unruly Subject

Student Resistance: A History of the Unruly Subject observes the rise and progression of student activism across the globe. By selecting critical case studies from the medieval to modern period, Mark Boren reveals how friction between activists and the academy can culminate in a violent struggle for power.

Using a uniquely international approach, the book offers a comprehensive introduction to the history of university activism and its influence on national politics and broader social movements. Specific instances of resistance, from medieval uprisings across European universities to the Tiananmen Square Massacre, are explored to produce a detailed historical study of power relations and oppression. Globalization and rapid technological advances have established more accessible platforms for collective activism whilst recent political upsets have generated a ripe environment for students to increase their efforts of resistance. This second edition addresses repercussions of the internet and social media age on the evolution of campus activism in the United States and abroad, from #blacklivesmatter to the Palestinian West Bank protests.

This timely revision of Student Resistance continues to reflect on the vital role that resistance plays in the evolution of modern societies and the book remains an essential text for both students and scholars of youth activism.

Introduction: The Importance of Student Resistance in the World

2 From the Renaissance to the Enlightenment: The Student Body Inflamed

3 1848, the Modernization of Student Power, and Rise of the Student Leader

11 The Late ‘90s and the New Millennium: the Flames of Protest Flare Anew

Epilogue: The Future of Student Resistance?

Mark Edelman Boren is a historian, literary scholar, writer, activist, and artist—and one of the foremost authorities on student activism. He’s published numerous works on protest and literature, and his art has shown in New York and London. He is Professor at the University of North Carolina Wilmington, USA.