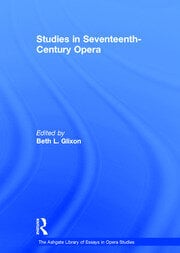 The past four decades have seen an explosion in research regarding seventeenth-century opera. In addition to investigations of extant scores and librettos, scholars have dealt with the associated areas of dance and scenery, as well as newer disciplines such as studies of patronage, gender, and semiotics. While most of the essays in the volume pertain to Italian opera, others concern opera production in France, England, Spain and the Germanic countries.

'...there is much here to stimulate and enhance the enjoyment of the thoughtful opera-goer, while at the same time there is much food for thought for performers, and above all producers...' Opera