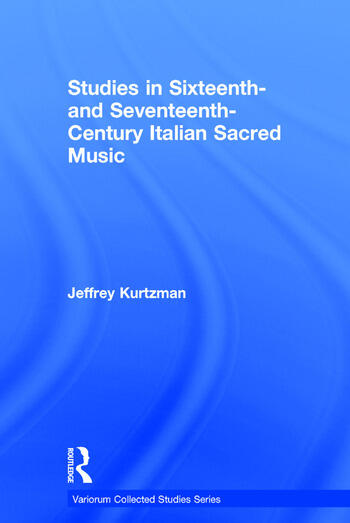 Although he is often identified as a Monteverdi scholar (Approaches to Monteverdi: Aesthetic, Psychological, Analytical and Historical Studies, published in the Variorum series in 2013), the majority of Jeffrey Kurtzman’s work has focused on other sixteenth- and seventeenth-century Italian sacred music. Organized into three sections, part one begins with a chapter on the Monteverdi Mass and Vespers of 1610 which spotlights the other major work in Monteverdi’s first prominent sacred print, the Missa in illo tempore, followed by examples of Kurtzman’s work on the sacred music of other composers such as Giovanni Francesco Capello and Palestrina. The section concludes with a piece on polyphonic psalm structures in seventeenth-century Italian Office music. Part two includes pieces which explore the relationship between the standard clef set, the high clef set, specific Magnificat tones and sounding pitch in the Magnificats of Roman composers; the issue of polyphonic psalm antiphons and the question of vocal and instrumental substitutes for plainchant antiphons in the Vespers service; and the use of instruments in the performance of sacred music, demonstrating that the concertato style of the seventeenth century had its origins in the practice of substituting instruments for voices and doubling voices with instruments, thereby introducing multifaceted possibilities for varying sonorities through the course of a composition. Part 3 contains two articles: the first surveying various styles in the Office repertoire of the seventeenth-century based on the approximately 1500 prints of Italian Office music in Kurtzman’s and Anne Schnoebelen’s catalogue of Mass, Office and Holy Week Music Printed in Italy, 1516-1770. The second article, published for the first time in this volume, assesses the impact on Italian liturgical music of the Catholic reform of the second half of the sixteenth-century.

Contents: Introduction; Bibliography; Part 1 Critical and Analytical Essays: A critical commentary on Monteverdi’s Missa in illo Tempore; Giovanni Francesco Capello: an avant-gardist of the early seventeenth century; Palestrina’s Magnificats: a brief survey; Polyphonic psalm structures in seventeenth-century Italian office music. Part 2 Performance Matters: Tones, modes, clefs and pitch in Roman cyclic Magnificats of the 16th century; Per fare il vespro meno tedioso: Don Pietro Maria Marsolo and the ‘antiphon problem’; The performance of eight-voice and polychoral psalmody with instruments in Italy and its role in the development of the concertato style in the sixteenth and early seventeenth centuries. Part 3 Historical Issues: Stylistic diversity in Vesper psalms and Magnificats published in Italy in the seventeenth century; The effect on Italian liturgical music of the Council of Trent (1562), the Breviarium Romanum (1568) and the Caeremoniale Episcoporum (1600); Indexes.

Jeffrey Kurtzman is Professor of Music at Washington University in St Louis, USA.