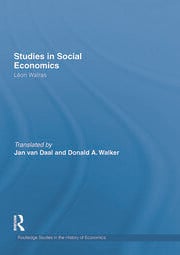 Léon Walras (1834–1910) is one of the four or five most important economic theorists in the history of the science. The present book is a complete English translation of the second edition (1936) of his Études d’économie sociale (1896), in which he applies economic theory to real problems, presents the essence of his normative economic ideas, and reveals himself to have also been a great thinker on human nature, justice, mores, and the structure of scientific inquiry and knowledge.

The book will be of interest to researchers and postgraduate students in the area of the history of economics as well as those interested in Walrasian topics, such as social justice, taxation, intellectual property, and land ownership.

Abbreviations and notes on the text Translators’ introduction 1. Aims of the translation 2. Walras, social science, and economics 3. Walras’s expository powers manifested in SSE 4. Editions of EES and contents of SSE 5. Concluding remarks. Appendixes to the Translators’ Introduction A. Walras’s terminology with regard to capital B. Comparisons of the pagination of editions 1 and 2 of EES and the Dockès edition Studies in Social Economics Author’s preface Part I: Seeking the Social Ideal 1. Socialism and liberalism 2. General theory of society: present state of economics and social science 1. First lecture: Competition between the principles of economic advantageousness and justice in socio-economic matters 2. Second lecture: Intervention of philosophical doctrines. The present battle between materialism and spiritualism in economics and social science 3. Third lecture: Critique of materialism. Critique of spiritualism. New point of view on social morality. 3. General theory of society: of man and society 1. Fourth lecture: Man and human destiny from a twofold point of view: physiologico-economic and psychologico-moral 2. Fifth lecture: Compatibility of material considerations and justice 3. Sixth lecture: The individual and the State. General formula of the constitution of moral science 4. Method of reconciliation or synthesis 1. Principles of the method of synthesis 2. Synthesis of socialism and liberalism 3. Synthesis of utilitarianism and moralism 4. Synthesis of communism and individualism Part II: Property 5. Theory of property 6. The Social Question 7. On intellectual property Part III: Realisation of the Social Ideal 8. Mathematical theory of the price of land and its purchase by the State 1. The doctrines of J. Mill and H.-H. Gossen 2. The price of land. Formula for the establishment of the normal price in the cases of a temporary or a perpetual variation of rent 3. The price of land. Formula for the variation of the normal price during the period of variation of rent 4. Buying up of the land by the State. Formula for repayment of the purchase price in scheduled amounts by using the rent of the land 5. Buying up of the land by the State. Variation of the sum owed during the period of repayment 6. Impossibility of repayment in case of paying the normal price 7. Critique of Gossen’s theory. Possibility of payment enabled by the increase in the rate of growth of rent 9. An unknown economist: H.-H. Gossen Part IV: Taxes 10. Remembrances of the Lausanne Conference 11. The tax on revenue and the tax on capital 12. The cadaster and the land tax 1. The present organization of the cadaster 2. The cadaster: land registration and fiscal registration 3. The cadaster in France, Belgium and Germany 4. The nature of the land tax 5. The basis of the land tax. State co-ownership of the land 6. The basis of the land tax. Distinction between land and capital 13. The fiscal problem 1. Multiple taxes. Single tax: proportional or progressive 2. Critique of taxes as a normal and definitive phenomenon 3. Taxation as an abnormal and transitory phenomenon. On the nationalization of land 4. France and the social question. Index of persons cited by Léon Walras. Subject index

Jan van Daal lectured at the Erasmus University Rotterdam. He has been an independent researcher at the Centre Auguste et Léon Walras, Université Lyon–2, and continues to specialise in research on the life and works of Léon Walras. He has been the president of the International Walras Society (2001-2002).

Donald A. Walker has similarly studied Walras’s ideas for many years. He has been the president of the History of Economics Society (1987-1988), named Distinguished Fellow of that Society (2006), editor of the Journal of the History of Economic Thought (1990-1998), president of the International Walras Society (1997-2000), and is University Professor Emeritus at Indiana University of Pennsylvania.

“The study of Léon Walras's contributions to economics has long been handicapped by the absence of English-language translations of Walras's major works. With the publication of this new translation of his Études d'économie sociale, we now have in English all three of Walras's major works and so have a far more complete picture of the depth and breadth of Walras's contributions. All students of the history of economics owe a debt of gratitude to Professors van Daal and Walker for their painstaking work in bringing this volume to publication.”

Steven G. Medema, Professor of Economics at the University of Colorado at Denver

"Studies in Social Economics, the English translation of Walras’ Études d’économie sociale, brings the normative element of Walras’ social theory to bear on his economics. The emerging picture is of extreme interest in the context of the standard presentation of equilibrium theory, particularly with respect to Walras’ deep concern with the question of social justice. This book casts serious doubts on whether it makes sense to divorce descriptive from normative economics. There is a lot to be learend from it, and it relates also to the current financial and economic crisis."