Studies in the Islam and Science Nexus
Volume 1 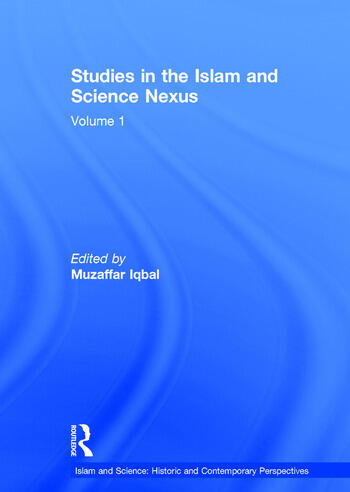 Studies in the Islam and Science Nexus: Volume 1

Contents: Introduction; Part I Framing the Discourse: Three views of science in the Islamic world, Ibrahim Kalin; What was Islamic in Islamic scientific tradition, Roshdi Rashed; Islam and science: a false statement of the problem, Dimitri Gutas; The unthought of Islamic science (part I), S. Parvez Manzoor; Islam and sciences of nature: some fundamental questions, Mehdi Golshani; Reformulating a comprehensive relationship between religion and science: an Islamic perspective, Osman Bakar; Islam and science: beyond the troubled relationship, Ziauddin Sardar. Part II Exploring Connections: Islam and the philosophy of science, Syed Muhammad Naquib al-Attas; Unseen and visible, Hamid Parsania; The question of cosmogenesis - the cosmos as a subject of scientific study, Seyyed Hossein Nasr; Holistic approach to scientific traditions, Alparslan AÃ§ikgenÃ§; Towards developing Islamic science: a review and appraisal, M. Saidul Islam; The significance of sufi-empirical principles in the natural theology and discourse on science in Islam, Azizan Baharuddin; The 'Tawhidi' precept in the sciences, Masudul Alam Choudhury; The cosmos as the created book and its implications for the orientation of science, Mohd Zaidi b. Ismail; Taskhir, fine-tuning, intelligent design and the scientific appreciation of nature, 'Adi Setia. Part III What Islamic Science is Not: Islam and the problem of modern science, Seyyed Hossein Nasr; Modern science and varieties of Muslim modernism, M. Maroof Shah; What Islamic science is not, Munawwar Ahmad Anees; A reply to 'what Islamic science is not', Jamal Mimouni; What Islamic science is not: a rejoinder, Munawwar Ahmad Anees. Part IV In Quest of a Revival: Islamic science as a scientific research program, conceptual and pragmatic issues, 'Adi Setia; Modes of operations in the quest of Islamic science, Shaharir Bin Mohammad Zain; Three meanings of Islamic science: toward operationalizing Islamization of science, 'Adi Setia. Part V Qur'an and Science Nexu

Muzaffar Iqbal is the founder-president of Center for Islam and Science, Canada. He is the author, editor and translator of twenty-one books on various aspects of Islam, its spiritual and intellectual traditions, Islam and the West, and the history of Islamic science. He is the General Editor of the forthcoming seven-volume Integrated Encyclopedia of the Qur'an, the first English language reference work on the Qur'an based on fourteen centuries of Muslim reflection and scholarship.