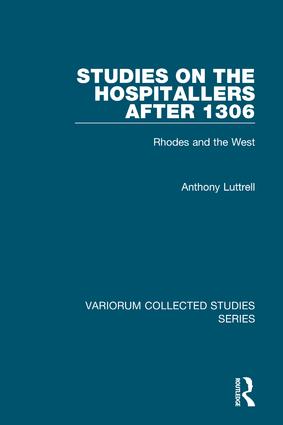 Studies on the Hospitallers after 1306

Rhodes and the West, 1st Edition

This is the fifth collection of studies on the Hospitallers of Rhodes by Anthony Luttrell to appear in the Variorum Collected Studies Series. In these 24 studies the emphasis is on the 14th century, on the central Convent facing the Turks, on the hinterland in the Order's European priories and commanderies, and on their interaction and interdependence. Together, they constitute another important body of work on the history of the Hospitallers. Particular topics include the nature of the Hospital as a military-religious order; its historiography, iconography, religiosity and finances; relations with the papacy; women members; Eastern outposts at Bodrum, on Kos and in mainland Greece; and developments in Hungary, England, Catalunya, Rousillon, and various parts of Italy.