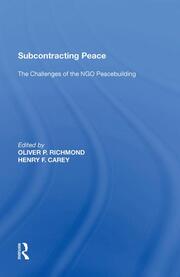 Non-governmental organizations (NGOs) have emerged as crucial actors in peacebuilding processes in post-conflict zones, contributing to the liberal state building project. NGOs, like any other organizations, have certain strengths and weaknesses, and face tradeoffs and contradictions in peacebuilding. Given increasing NGO experience in peacemaking and peacebuilding, this volume examines their relatively positive record, as well as the constraints, limitations, and sometimes contradictory impact of their activities and interventions.