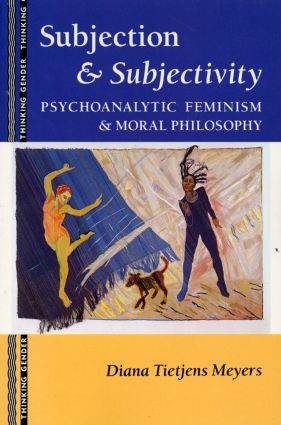 Diana Tietjens Meyers examines the political underpinnings of psychoanalytic feminism, analyzing the relation between the nature of the self and the structure of good societies. She argues that impartial reason--the approach to moral reflection which has dominated 20th-century Anglo-American philosophy--is inadequate for addressing real world injustices. Subjection and Subjectivity is central to feminist thought across a wide range of disciplines.

"In Subjection and Subjectivity Professor Meyers has grasped an idea that ought to have been clear to us all but has eluded us until now: that the explorations of a depth psychology are crucial to formulating a theory of moral personality. Moreover, that the revisions and investigations by feminists into the possibilities of an adequate theory of personality afforded by psychoanalysis is a field rife for concepts useful for the feminist project of reorienting ethics to include issues of gender and differences. Meyers digs deep into this plentitude. And she extracts many important conceptions. Foremost amongst these riches are the idea of emphatic thought, dissident speech, the role of figuration in the perpetuation of prejudice against differences, and the heterogeneous self. The coup de grace is the development of a distinctive and powerful conception of moral subjectivity--one adequate to resist subjection." -- Eva Feder Kittay, State University of New York, Stony Broo

"In Subjection and Subjectivity Diana Meyers constructs a meeting place for feminism, psychoanalysis, and moral philosophy, and this original conjuncture puts interesting demands on each: psychoanalysis must justify its political relevance, feminism must field a psychology as well as politics, and ethics has to reckon with profound and intractable social problems that (astonishingly) scarcely appear in the Anglo-American literature." -- Margaret Walker, Fordham University

Diana Tietjens Meyers is Professor of Philosophy at the University of Connecticut.