Subjectivity in Motion
Life, Art, and Movement in the Work of Hermann Rorschach 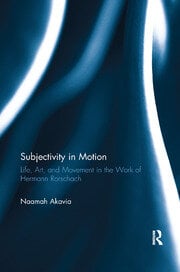 Subjectivity in Motion: Life, Art, and Movement in the Work of Hermann Rorschach

The motif of human movement has long been understood as central to Hermann Rorschach’s strikingly innovative inkblot experiment. But owing to Rorschach’s untimely death a year after publishing his famous work, Psychodiagnostics, the world has lacked an adequate understanding of how he came to put so much stress on human movement in his unique perceptual theory. Now historian Naamah Akavia changes that with her illuminating study of the intellectual and clinical development of this Swiss pioneer. Based on new archival researches and an unprecedented appreciation for Rorschach’s milieu and his times, Subjectivity in Motion: Life, Art, and Movement in the Work of Hermann Rorschach is destined to become an instant classic in the history of psychology and psychiatry—and an important new contribution to our understanding of how movement figures in modernity generally. The historian will appreciate the intricate analysis of Rorschach’s engagement with a wide variety of figures and movements ranging from Mourly Vold and Freud to Jung and Eugen Bleuler, from schizophrenia to Russian Futurism and Eurhythmics, from the word association experiment to the works of Alfred Kulbin and Ferdinand Hodler. But it is the psychologist who will benefit most profoundly from this richly detailed exploration, for the topic of human movement, how it is perceived, and how that figures in personality generally will never quite look the same again.

Naamah Akavia graduated summa cum laude in 2003 with a master’s degree from The Cohn Institute for the History and Philosophy of Science and Ideas, Tel-Aviv University, where she was awarded the Amos Funkenstein Prize for her study of Binswanger’s “Case of Ellen West.”  She then enrolled in the History Department of UCLA, where she submitted her doctoral dissertation shortly before dying in February 2010. To support her writing and her research at the Rorschach Archives in Bern, Switzerland she was awarded a doctoral research grant from Deutscher Akademischer Austausch Dienst (DAAD) and a pre-doctoral fellowship from the Max Planck Institute for the History of Science in Berlin.

“Subjectivity in Motion is an unconventional book about an unconventional personality. [...] In highly nuanced pages Akavia succeeds in avoiding a 'narrative of influence,' showing on the one hand, how Swiss psychiatrists responded  to French and German traditions; on the other, how Rorschach found his own peculiar voice within this rich, provocative, often contentious intellectual environment. [...] Naamah Akavia’s book is based on solid, detailed archival research, but deliberately avoids academic jargon and technicalities. [...] Anybody interested in the history of XXth century psychiatry, psychology, and psychoanalysis, as well as of XXth century avant garde movements, will find rich food for thought in this fascinating case study.” - Carlo Ginzburg, Scuola Normale Superiore, Pisa

“In Subjectivity in Motion: Life, Art, and Movement in the Work of Hermann Rorschach, Dr. Akavia has produced a wholly original account of the historical conditions within which Rorschach produced his famous inkblot test. In her hands the test becomes a probe for exploring the meaning of movement, not only for psychiatry and experimental psychology, but for aesthetics in the visual arts, such as painting and dance. [...] Akavia enables us to see in analytic detail, but also in broad perspective, how Rorschach’s inkblot ‘experiment’ was anchored both in his clinical experience with specific patients and in the widely-discussed contemporary theme of movement, placed always between freedom and constraint.” -  M. Norton Wise, Distinguished Professor, Department of History; Co-Director, Center for Society and Genetics, UCLA

"An extraordinary work of scholarship, this book is nevertheless compulsively readable. It completely changes our usual understanding and evaluation of Hermann Rorschach, who was so much more than the ingenious author of a now controversial ‘projective test.’ Dr. Akavia puts his work into a surprisingly fresh cultural and historical context, greatly adding to our appreciation of Rorschach’s creative work and the breadth of his vision. This fascinating revisiting of an often overlooked period in the history of medicine, psychology, the arts, and ideas deserves a wide readership." - Robert R. Holt, PhD, Professor Emeritus, New York University

"This is a remarkable book, its range of topics discussed not fully revealed by its title. I learned a great deal about Herrman Rorschach's work that goes far beyond his 'invention' of the Rorschach Ink-blot test. The chapters on Rorschach's discussion of schizophrenia and on movement in art alone are well worth the price of the book. They, along with the rest of the book, are insightful and fascinating." - Morris Eagle, PhD.ABPP, Professor Emeritus, Derner Institute of Advanced Psychoplogical Studies, Adelphi University, New York; Distinguished Educator-in-Residence, California Lutheran University