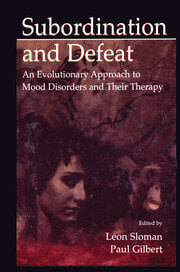 Subordination and Defeat: An Evolutionary Approach To Mood Disorders and Their Therapy

Most people now accept that human beings are the product of millions of years of mammalian evolution and, more recently, primate evolution. This landmark book explores the implications of our evolutionary history for theories and therapies of depression. In particular, the focus is on how social conflict has shaped various behavioral and psychophysiological systems. Special attention is given to the evolved mechanisms for dealing with social defeat and subordination in both animals and humans. By linking human depression to the activation of ancient psychobiological programs for dealing with social conflict, one is able to understand the function of depression within groups, family systems, and between individuals and begin to distinguish depressions that may have adaptive functions from those that are the result of maladaptive feedback systems.

Although many acknowledge the need for an integrated, biopsychosocial theory of psychopathology, there continue to be great divisions among social, psychological, and biological approaches. Sloman and Gilbert have brought together leading scientists and clinicians representing different disciplines and schools to present a provocative new evolutionary model of depression. This model illuminates old problems in new ways, links a common disabling condition to evolved mental mechanisms, and points to potential new approaches to prevention and intervention. The book will be of compelling interest to all those who study or treat mood disorders.

"The ideas presented in this book should be exciting for therapists and depressed clients alike, because the evolutionary approach to understanding depression readily suggests the development of effective psychotherapeutic treatment strategies....This book is well worth reading and its content deserves thoughtful consideration."
—Metapsychology

"A very good idea is presented, and correlated findings are presented in a fine biopsychosocial fashion....I do firmly recommend this book to anyone interested in an evolutionary approach to, and a broader understanding of, depression and mental disorders."
—Human Ethology Bulletin

"The publication of Subordination and Defeat: An Evolutionary Approach to Mood Disorders and Their Therapy is a major step forward in the understanding and treatment of clinical depression. Since John Price's path-breaking article on dominance, ranking, and mental illness in 1967, a substantive body of theory and research has emerged on subordination, defeat, powerlessness, and suboptimal attachment as they cause and/or aggravate mood disorders and depression. Sloman and Gilbert do an excellent job of integrating the various strands of this literature, and the strong panel of experts, new conceptual models, and provocative treatment approaches are just a few strengths of this highly recommended work."
—Kent G. Bailey, Ph.D.
Virginia Commonwealth University