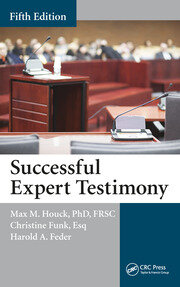 A major revision of the landmark book on expert testimony Feder’s Succeeding as an Expert Witness, Successful Expert Testimony, Fifth Edition highlights the book’s value to both attorneys and expert witnesses in promoting effective, impactful courtroom testimony. The book outlines the role of expert testimony in a trial, including explanations of methods, testing, and science, the legal process, and an overview of the roles of each player.

Succeeding as an expert witness requires a basic understanding of who and what experts are and what role they play in rendering their opinions within the courts. The new edition has been fully updated to present key information on the most vital topics, including the deposition, a discussion of false or unsupported testimony, adherence to scientific principles, and direct and cross-examination testimony of expert witnesses.  Each chapter includes key terms, review questions, and thought-provoking discussion questions for further consideration of the topics addressed.

Given many high profile cases and increasing incidents of misconduct, this edition focuses heavily on the role of ethics in expert testimony and forensic practice.  The full revised chapter on ethics, covers unethical conduct of forensic witnesses, admissibility of expert testimony, inter-professional relations, abuse of and by experts, and forensic professional codes of ethics.

7. The Visual Display of Information

Dr. Max M. Houck is an international forensic expert with over 25 years of experience. Houck has experience in the private sector, academia, local government, and worked at the Federal Bureau of Investigation Laboratory Division. He has worked as a forensic anthropologist, a trace evidence analyst, a researcher, and has managed millions of dollars in grants and awards. He was the inaugural Director of the Department of Forensic Sciences in Washington, D.C., overseeing 150 employees and managing the forensic science laboratory, the public health laboratory, and crime scene sciences for the nation’s capital. Houck has worked on a number of mass casualty scenes, including the Branch Davidian Investigation and the September 11, 2001 attack on the Pentagon. Widely published, Houck has dozens of peer-reviewed journal articles and is the author and editor of numerous books. He is co-author of the best-selling Fundamentals of Forensic Science, Science of Crime Scenes, and Success with Expert Testimony, among others. He is the editor of the Advanced Forensic Science series of books. Houck is also founding co-editor of Forensic Science Policy and Management. Houck has served on numerous committees, including for the National Academies of Science, NIST, Interpol, The Royal Society, the Director of the FBI, and the White House. He is a popular public speaker and has given presentations at NASA, the Max Planck Institute, an Oxford Roundtable, as well as keynote talks at numerous international conferences. His research topics include management, leadership, and policy implications for forensic organizations. Houck has a Bachelors and Masters degree in anthropology from Michigan State University. He received his Ph.D. in Applied Chemistry Summa Cum Laude from Curtin University in Perth, Australia. He is a Fellow of the Royal Society of Chemistry. Houck is the Director of the Forensic Studies & Justice program at University of South Florida St. Petersburg.

started her career in the Minnesota Office of the Public Defender in 1994. In 1995, she was assigned her first forensic DNA case. Not a scientist by training, she struggled to understand the complexities of forensic evidence. Over the years, her forensic caseload expanded to include arson, broken babies, drug chemistry, forensic biology, bitemarks, as well as the study of false confessions and eyewitness identification in the context of complex litigation. In 2013, Funk moved to Washington, DC to become General Counsel for the Department of Forensic Sciences. This experience provided additional insights as to how forensic science fits within the criminal justice system. In 2017, Funk returned to Minnesota, where she writes about issues pertaining to the law and forensic science, provides representation to indigent clients, and consults with criminal justice stakeholders, as well as those writing about forensic science – from investigative pieces to movie scripts to a television pilot. Previously, Ms. Funk has served on the Legal Resource Committee for the Organization of Scientific Area Committees, the Board of the Minnesota Innocence Project, the Forensic Laboratory Advisory Board for the state of Minnesota, and the White House Sub-Committee to the Sub-Committee on Forensic Science in Education, Ethics, and Terminology.

Harold A. Feder (1932-1995) was a trial lawyer with 35 years of trial experience. Most of his cases involved the use of experts. Feder was a fellow of the college of Law Practice Management and the American Academy of Forensic Sciences, a member of the Association of Trial Lawyers of America past president of the Colorado Trial Lawyers Association, and an active member of the American and Colorado Bar Associations. Feder wrote and lectured extensively on legal matters, including expert testimony, throughout the United States and Canada for over 20 years. He wrote Succeeding as an Expert Witness in 1991; the text was revised in 1993, 2000, and 2008.