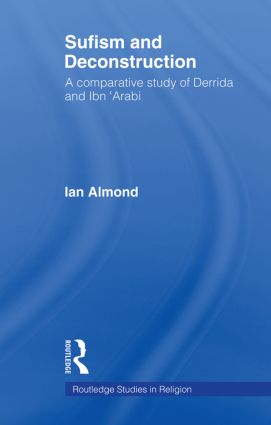 A Comparative Study of Derrida and Ibn 'Arabi, 1st Edition

Examinung a series of common features in the works of Derrida and the Sufism of Ibn 'Arabi, considered to be one of the most influential figures in Islamic thought, the author addresses the significant absence of attention on the relationship between Islam and Derrida. Presenting a deconstructive perspective on Ibn 'Arabi, the book's features include:

* the opposition to systematizing representations of God/reality/the text

* a common conception of rational thought as restrictive, commodifying and ultimately illusory - and a subsequent appraisal of confusion as leading to a higher state of knowledge

* a positive belief in the infinate interpretability of the text

* a suspicion of represention - and an awareness of its semantic futility, along with a common, 'welcoming' affirmation of openness and errancy towards God and the text.

This book will be essential reading for advanced students and academics of Religious studies, Arabic and Islamic studies and those interested in the work of Derrida and Ibn 'Arabi.

1. The Shackles of Reason: Sufi/Deconstruction Opposition to Rational Thought 2. The Honesty of the Perplexed: Derrida and Ibn 'Arabi on 'Confusion' 3. Sages of the Book: The Meaning of Infinity in Sufi and Deconstructive Hermeneutics 4. Mystery-Tasting and Abyssality: The Secret of the Self in Abn 'Arabi and Derrida Conclusion: The Poststructuralist Dissolution of the Subject: Three Neoplatonic Moments in the Derridean Canon