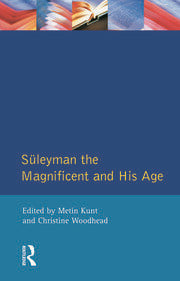 Suleyman the Magnificent and His Age: The Ottoman Empire in the Early Modern World

Sultan Suleyman the Magnificent (r.1520-1566) dominated the eastern Mediterranean and Ottoman worlds - and the imagination of his contemporaries - very much as his fellow sovereigns Charles V, Francis I and Henry VIII in the west. He greatly expanded the Ottoman empire, capturing Rhodes, Belgrade, Hungary, the Red Sea coast of Arabia, and even besieging Vienna. Patron and legislator as well as conqueror, he stamped his name on an age. These specially-commissioned essays by leading experts examine Suleyman's reign in its wider political and diplomatic context, both Ottoman and European.

Preface.
Note on spelling and pronunication of Turkish.
List of abbreviations. Notes on contributors.
Introduction. Metin Kunt, State and sultan up to the age of Süleyman: frontier principality to world empire.