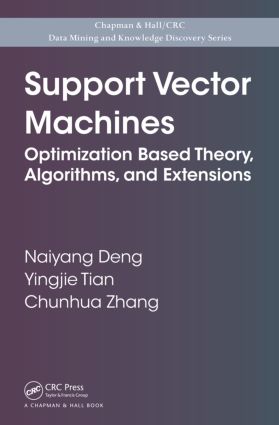 Support Vector Machines: Optimization Based Theory, Algorithms, and Extensions presents an accessible treatment of the two main components of support vector machines (SVMs)—classification problems and regression problems. The book emphasizes the close connection between optimization theory and SVMs since optimization is one of the pillars on which SVMs are built.

To improve readability, concepts, methods, and results are introduced graphically and with clear explanations. For important concepts and algorithms, such as the Crammer-Singer SVM for multi-class classification problems, the text provides geometric interpretations that are not depicted in current literature.

Enabling a sound understanding of SVMs, this book gives beginners as well as more experienced researchers and engineers the tools to solve real-world problems using SVMs.

This book provides a concise overview of support vector machines (SVMs), starting from the basics and connecting to many of their most significant extensions. Starting from an optimization perspective provides a new way of presenting the material, including many of the technical details that are hard to find in other texts. And since it includes a discussion of many practical issues important for the effective use of SVMs (e.g., feature construction), the book is valuable as a reference for researchers and practitioners alike.

The books on support vector machines (SVMs) in Chinese written by the same authors are very popular in China. It is really great that the authors have translated the books into English and made further extensions on them. One thing which makes the book very unique from the other books is that the authors try to shed light on SVM from the viewpoint of optimization. I believe that the comprehensive and systematic explanation on the basic concepts, fundamental principles, algorithms, and theories of SVM will help readers have a really in-depth understanding of the space. It is really a great book, which many researchers, students, and engineers in computer science and related fields will want to carefully read and routinely consult.

This book comprehensively covers many topics of support vector machines (SVMs). In particular, it gives a nice connection between optimization theory and support vector machines. In my experience of developing the popular SVM software LIBSVM, I found that many users lack a good understanding of the optimization concept behind SVM. This book starts with explaining basic knowledge of convex optimization and then introduces linear support vector classification and regression. Next, it discusses kernel SVM and the practical implementation. The setting allows readers to easily learn how optimization techniques are used in a machine learning technique such as SVM.

Support Vector Machines and Their Properties

An Implementation of Structural Risk Minimization