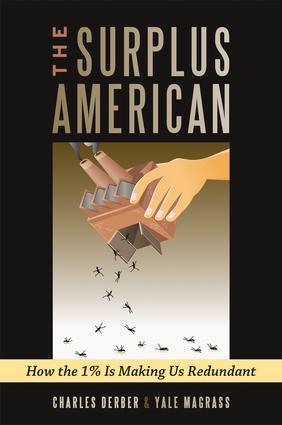 How the 1% is Making Us Redundant, 1st Edition

The Surplus American considers a future where increasing numbers of Americans will be rendered jobless and redundant. Exploring the ongoing crisis of 'surplus people' today, authors Charles Derber and Yale Magrass show that the jobless are merely the tip of the iceberg. Drawing on the work of economists and highlighting new trends, the book identifies a number of primary groups within the category of 'surplus' including the underemployed, people forcibly removed or induced to leave the labour force and retirees. Derber and Magrass argue that a majority of the US public is now part of the surplus population constituting an integral part of the economy. The authors conclude that these movements will be essential to solving the crisis of surplus people and redirecting the economy in a more positive direction.

”A lucid and informative analysis of how our increasingly dysfunctional socioeconomic system is intensifying the process of turning America into a land of surplus people, decaying infrastructure, and shredded formal democracy—and of what we can do about it”

“Derber and Magrass’s crisp book dramatizes the powerful forces undermining job security and rendering most of us surplus, not just economically but in almost every way. An essential read for anyone who wants to understand the history and future of work, politics, and social movements in America—with a hopeful roadmap to creating an economy and a society that work for everyone.”

—Chuck Collins, Institute for Policy studies, and author of 99 to 1: How Wealth Inequality is Wrecking the World and What We Can Do About It

“This is a wonderfully imaginative but disturbing prophecy of where corporate outsourcing of American jobs—and other, often hidden trends in government policies for education, youth, the elderly, the military, and the imprisoned—could lead by 2020. The dystopia which they outline—in the book and in its concluding play—is all too believable unless American’s adopt the new forms of democratic resistance that their encouraging final chapters advocate.”

“Derber and Magrass have produced a double-header for the agitating mind—a people’s history and a people’s theatre. For action, you take it from there, where you live.”

“Written in a very accessible style, the book elicits both lay and professional readers’ curiosity, and leaves a decided impression that the author is an engaging, insightful teacher well worth talking to. Highly recommended.”

“Derber and Magrass have done a masterful job in explaining the major issues of political economy facing us today. The analysis is complemented brilliantly with a play, ready to be acted out in classrooms, religious groups, and book groups, to better help illustrate the absurd tragedy of the masses of people being cast aside and to show how America’s majority can band together to reclaim our democracy.”

—Jonathan White, co-author of The Engaged Sociologist and of Sociologists in Action