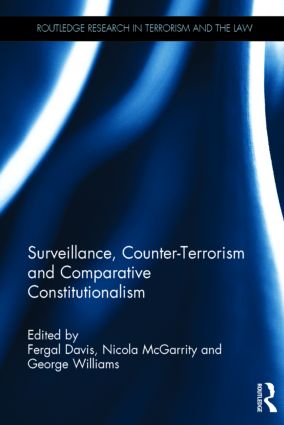 The decade after 11 September 2001 saw the enactment of counter-terrorism laws around the world. These laws challenged assumptions about public institutions, human rights and constitutional law. Those challenges are particularly apparent in the context of the increased surveillance powers granted to many law enforcement and intelligence agencies.

This book brings together leading legal scholars in the field of counter-terrorism and constitutional law, and focuses their attention on the issue of surveillance.  The breadth of topics covered in this collection include: the growth and diversification of mechanisms of mass surveillance, the challenges that technological developments pose for constitutionalism, new actors in the surveillance state (such as local communities and private organisations), the use of surveillance material as evidence in court, and the effectiveness of constitutional and other forms of review of surveillance powers.

The book brings a strong legal focus to the debate surrounding surveillance and counter-terrorism, and draws important conclusions about the constitutional implications of the expansion of surveillance powers after 9/11.

Part 1: Introduction 1. Mapping the Terrain, Fergal Davis, Nicola McGarrity and George Williams 2. A Judicial Perspective: Surveillance Evidence and the Right to a Fair Tria, Anthony Whealy QC Part 2: Who is Watching? 3. Championing Local Surveillance in Counter-Terrorism, Clive Walker 4. Surveillance Regimes in Contemporary India, Ujjwal Singh 5. Privatised Counter-Terrorist Surveillance: Constitutionalism Undermined, Fiona de Londras 6. How Secure is our Privay in Seceurope? European security through surveillance, Moica de Boer and Flora Goudappel Part 3: The Challenges of Technology for the Right to Privacy 7. Preserving Privacy in a Digital Age: Lesson of comparative constitutionalism, David Cole 8. On the End of Freedom in Public Spaces: Legal challenges of wide-area and multiple sensor surveillance systems, Jens Kremer 9. GPS Surveillance and Human Rights Review: The European Court of Human Rights and the United States Supreme Court in Comparative Perspective, Federico Fabbrini and Mathias Vermeulen 10. The Impact of Human Rights Law on Measure of Mass Surveillance in the United Kingdom, Merris Amos Part 4: Surveillance Across Borders 11. Transatlantic Perspectives on Counter-Terrorism Surveillance: Surveillance, borders and the culture of legality, Cian Murphy 12. From the West to the East: Migration of Surveillance Policy Part 5: Surveillance as Intelligence in the United States 13. Warrantless Wiretrapping in the United States, Owen Fiss 14. From Convert to Coercive: A new model of surveillance by intelligence agencies, Nicola McGarrity and George Williams 15. The Use or Intelligence in Counter-Terrorism Prosecutions and the Role of the Prosecutor, David Scharia Part 6: The Potential to Change 16. State Surveillance in an Age of Security, Conor Gearty 17. Politicized Challenges, De-Politicised Responses: Political monitoring in China's transitions, Hualing Fu 18. Internet Surveillance and Poluar Constitutionalism, Vanessa MacDonnell

George Williams is the Anthony Mason Professor of Law, a Scientia Professor and the Foundation Director of the Gilbert + Tobin Centre of Public Law, University of New South Wales, Sydney, Australia. As an Australian Research Council Laureate Fellow, he is currently engaged in a five year international project entitled: Anti-Terror Laws and the Democratic Challenge.

Routledge Research in Terrorism and the Law