Sustainability
A Way to Abundance 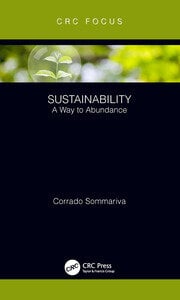 Sustainability: A Way to Abundance

The book describes mechanisms whereby the Earth naturally thrives towards energy and resources abundance and how unsustainable industrial practices alter this trend.

Provides a good quantification of the concepts of sustainability and its effects on the environmentn and  critical analysis and updates to the relationships between the environmental impact, affluence and technology

Dr. Sommariva is Managing Director and member of the board of ILF Consulting Engineers Middle East.

Dr. Sommariva has a PhD in Chemical Engineering from Genoa University and a Diploma in Management from Leicester University.

In November 2013 Dr. Sommariva was conferred an honorary degree by Herriot Watt University in recognition to his contributions to chemical engineering.

He is an honorary Professor at Genoa and L’Aquila Universities where he holds regular courses on water treatment, energy efficiency, desalination and economics. He has published over 80 papers on various leading edge technical research and economics and published two books on water management and economics.

Dr. Sommariva was the President of IDA for the term 2011-2013, served as Co-Chairman of the Technical Program for the 2009 IDA World Congress in Dubai and Chairman of IDA’s recently held conference, "Desalination Industry Action for Good," a landmark event held in Portofino, Italy that focused on water and social responsibility.

Along with his company ILF Dr. Sommariva was engaged in the development of the largest Photovoltaic project in the GCC at His Highness Mohammed bin Rashid Al Maktoum Solar Park and he was one of the promoters of the unique program for sustainable desalination that was launched by MASDAR in Ghantoot.

Dr. Sommariva has been President of the European Desalination Society (EDS) and chairman of the World Health Organization’s committee for the establishment of safe drinking water.

In May 2014 Dr. Sommariva has been conferred by the President of Italy the title of "master of work" along with the cross of merit for his work distinguished contribution and career.