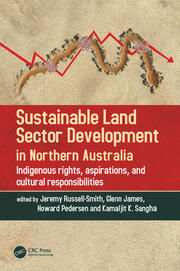 Sustainable Land Sector Development in Northern Australia sets out a vision for developing North Australia based on a culturally appropriate and ecologically sustainable land sector economy. This vision supports both Indigenous cultural responsibilities and aspirations, as well as enhancing enterprise opportunities for society as a whole. In the past, well-meaning if often misguided policy agendas have failed - and continue to fail - North Australians. This book helps breach that gap by acknowledging and harnessing Indigenous cultural strengths and knowledge systems for looking after the country and its people, as part of a smart, novel and diversified ecosystem services economy.

Preamble. Change and continuity: the North Australia cultural landscape. Northern Australian History — Dispossession, Colonisation and the Assertion of Indigenous Rights. Economic Development across the North: historical and current context of possible alternatives. Towards a sustainable diversified land sector economy for North Australia. Resilient communities and reliable prosperity. Like a Rusty Nail, You Can Never Hold Us Blackfellas Down; Cultural Resilience in the Southwest Gulf Of Carpentaria. Governing Northern Australian landscapes for a better future.

Jeremy Russell-Smith is an ecologist who, since the early 1980s, has worked and published extensively on fire ecology, carbon market, and Indigenous land management issues in northern Australia, and related issues elsewhere in the tropics. He is the Professor of tropical fire ecology and management at Charles Darwin University, Darwin, where he leads the applied research program of the Darwin Centre for Bushfire Research.

Howard Pedersen has been working with Indigenous leaders in northern Australia as policy advisor and speechwriter since the early 1980s. He has worked in government and Aboriginal organisations and his professional experience spans the breadth of the big picture policy issues which have shaped northern Australian development including land rights and native title, economic empowerment and cultural protection and renewal. In 1995 his award winning book, Jandamarra and the Bunuba Resistance, written in collaboration with story teller Banjo Wurunmurra, was released and subsequently promoted through children’s books, an award winning TV drama/documentary and theatre productions. Howard currently works as policy advisor to the Yawuru native title holders in Broome.

Glenn James is the Program and Policy Manager with the North Australian Indigenous Land and Sea Management Alliance Ltd in Darwin. He has lived in remote Central and North Australia for almost 30 years. Over this period his work has spanned a number of interrelated areas including Indigenous community arts, Anthropology and land management enterprise; in recent years focussing on tools to identify and track the health of local Indigenous values as they transition to land management based enterprise. Glenn’s formal education in Political Science, Philosophy and Anthropology, combined with his equally formative lived experience in remote communities and many personal and professional relationships in remote Australia, informs his long term support for the aspirations and achievements of Indigenous people.

Kamaljit Sangha works as an ecological economist at the Darwin Centre for Bushfire Research at Charles Darwin University. Currently she is involved in developing mechanisms for Payments for Ecosystem Services (PES), highlighting the role of natural systems for human wellbeing especially in Indigenous and local communities, and valuing ecosystems for their services (ES) to inform policy decision making.