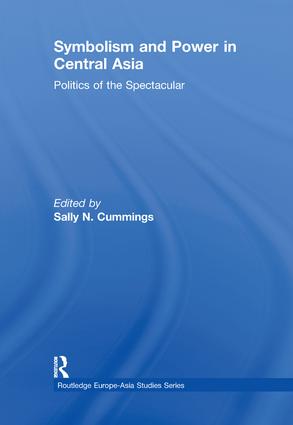 Symbolism and Power in Central Asia

Politics of the Spectacular, 1st Edition

With the collapse of communism, post-communist societies scrambled to find meaning to their new independence. Central Asia was no exception. Events, relationships, gestures, spatial units and objects produced, conveyed and interpreted meaning. The new power container of the five independent states of Kazakhstan, Kyrgyzstan, Tajikistan, Turkmenistan and Uzbekistan would significantly influence this process of signification. Post-Soviet Central Asia is an intriguing field to examine this transformation: a region which did not see an organised independence movement develop prior to Soviet implosion at the centre, it provokes questions about how symbolisation begins in the absence of a national will to do so.

The transformation overnight of Soviet republic into sovereign state provokes questions about how the process of communism-turned-nationalism could become symbolised, and what specific role symbols came to play in these early years of independence. Characterized by authoritarianism since 1991, the region’s ruling elites have enjoyed disproportionate access to knowledge and to deciding what, how and when that knowledge should be applied. The first of its kind on Central Asia, this book not only widens our understandings of developments in this geopolitically important region but also contributes to broader studies of representation, ritual, power and identity.

This book was published as a special issue of Europe-Asia Studies.

The Routledge Europe-Asia Studies Series focuses on the history and current political, social and economic affairs of the countries of the former ‘communist bloc’ of the Soviet Union, Eastern Europe and Asia. As well as providing contemporary analyses it explores the economic, political and social transformation of these countries and the changing character of their relationships with the rest of Europe and Asia.