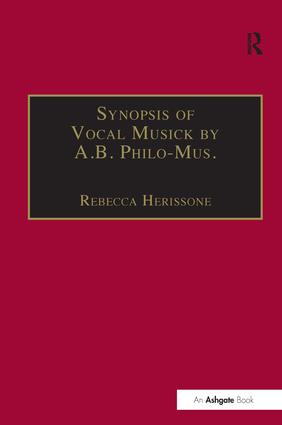 Synopsis of Vocal Musick, by the unidentified A.B., was published in London in 1680 and appears to have only ever had one edition. Its relatively short shelf-life belies its importance to the history of early British music theory. Unlike other English theoretical writings of the period, the Synopsis derives many of its aspects from the continental theoretical tradition, including the first references in English theory to the modern fractional time signatures that had been invented in Italy in the mid-seventeenth century, the first references in English to compound time and the first explanations of tempo terms such as Adagio and Presto. In these respects the treatise forms an important link between English and continental theoretical traditions and may have encouraged the adoption of Italian principles which became a common feature of English writings by the early eighteenth century. The treatise is essentially in two parts. The first section of the book comprises rudimentary instruction on understanding notation and intervals, descriptions of common vocal ornaments and instruction in the process of learning to sing. The second part consists of a selection of psalms, songs and catches which are provided as exercises for the singer, though several of them require a reasonably advanced degree of skill. These pieces provide valuable insight into the way both sacred and secular music might have been performed by amateur musicians in the Restoration period. They include 14 rare English madrigal settings by the Italian composer Gastoldi - further evidence of the Italian influence which pervades the text. This is the first modern edition of the Synopsis, and indeed the first edition to appear since its original publication.

’Overall, the book is an excellent edition and examination of this neglected treatise, and one that has a broader relevance to musical scholarship than might be anticipated. Anyone with an interest in seventeenth-century musical culture would benefit from reading this well-organized and thoughtful presentation of the Synopsis of Vocal Musick. The text is elegantly written and engaging, the edition itself is a fascinating insight into the expectations of the novice singer of the period.’ Studies in Musical Theatre

Contents: Preface; Introduction. Synopsis of Vocal Musick: The preface; Epistola Dedicatoria; Of Vocal Musick in general; Of the Notes; Of the Pricks; Of the Pauses; Of the Signs of the Common Time; Of the slower Triple; Of the Swifter Triple; Of the Swiftest Triple; Of the slower Sesquialtre; Of the Swifter Sesquialtre; Of the Swiftest Sesquialtre; Of the Systems; Of the Bars, and Repeats; Of the Cliffs; Of the Use of Cliffs in respect of Voices; Of the Use of Cliffs in respect of Notes; Of the Syllables; Of the Scale of Musick; Of the Order of the Generation of the Degrees; Of the Intervals of the Degrees; Of the agreeableness of the Cliffs and Syllables with the Degrees of the Scale of Musick; Of the generation of an Eighth in b flat; Of the lesser principal and secondary contained signs; Of the signs of the breadth of sounds, and of things; Of the signs of the Ornaments of Songs; Of the second Mean to attain the Art of Musick. Twelve Most Usual Tunes of Psalms: In Three Parts. Treble, Mean, and Bass; Twelve Selected English Tunes in Three Parts. Two Trebles and a Bass; Twelve Selected English Catches A. 3. Voc. Composed by sundry Authors; Fourteen Italian Songs Composed by Giovanni Giacomo Castoldi da Carravaggio; Notes; Critical commentary; Appendix; Bibliography; Index.

Rebecca Herissone is Lecturer in Musicology in the School of Arts, Histories and Cultures at the University of Manchester, UK.

The purpose of this series is to provide critical editions of music theory in Britain (primarily England, but Scotland, Ireland and Wales also) from 1500 to 1700. By 'theory' is meant all sorts of writing about music, from textbooks aimed at the beginner to treatises written for a more sophisticated audience. These foundational texts have immense value in revealing attitudes, ways of thinking and even vocabulary crucial for understanding and analysing music. They reveal beliefs about the power of music, its function in society and its role in education, and they furnish valuable information about performance practice and about the context of performance. They are a window into musical culture every bit as important as the music itself.

The editions in this series present the text in its original form. That is, they retain original spelling, capitalization and punctuation, as well as certain salient features of the type, for example, the choice of font. A textual commentary in each volume offers an explication of difficult or unfamiliar terminology as well as suggested corrections of printing errors; the introduction situates the work and its author in a larger historical context.