Syria in World War I
Politics, economy, and society 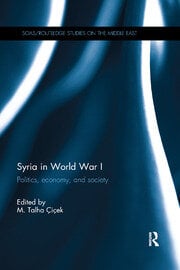 Syria in World War I: Politics, economy, and society

The First World War quickly escalated from a European war into a global conflict that would cause fundamental changes in the Middle East, Africa, Asia and the Americas. Its end signalled the dissolution of the Ottoman Empire, which had controlled most of the Arab Middle East.

Over the wartime period, millions of people across the Empire died as a result of warfare, epidemics, famines and massacres. However, for the Ottoman leaders their entry into the war was not just a response to a life-or-death struggle, but rather presented them with an opportunity to transform the empire into a new type of state. Syria in World War I brings together leading scholars working with original Turkish, Arabic, Armenian and German sources, to present a comprehensive examination of this key period in Syria’s history. Together, the chapters demonstrate how the war represented a radical break from the past for the Syrian lands, which underwent crucial political, economic, social and cultural transformations. It contextualises various facets of the then Unionist ruler of Syria, Djemal Pasha, as well as exploring the impact of the Ottoman leaders’ divergent policies on the Syrian lands and people, which would undergo a series of political, economic and ecological catastrophes whose traces are still evident in the region’s collective memory.

Introducing a significant body of new information and considerably expanding the parameters of current debates, Syria in World War I is of key interest to students and scholars of Middle East History, as well as History of the Late Ottoman Empire and World War I History.

INTRODUCTION M. Talha Çiçek Chapter 1: Myth of the Unionist Triumvirate: the Formation of the CUP Factions and their Impact in Syria during the Great War M. Talha Çiçek Chapter 2: Muhammad Kurd Ali and the Syrian-Palestinian Intelligentsia in the Ottoman Campaign against Arab Separatism Salim Tamari Chapter 3: A Propaganda Tour Organized by Djemal Pasha: The Arab Literati’s Visit to the Gallipoli Front, 18 - 23 October 1915 Ayhan Aktar Chapter 4: ‘We will treat you as we did with the Armenians’: Djemal Pasha, Zionism and the evacuation of Jaffa, April 1917. Roberto Mazza Chapter 5: The Ottoman Government and the Zionist Movement during the First Months of World War I Hilmar Kaiser Chapter 6: Fragments of Wartime Memories from Syria and Lebanon Najwa al-Qattan Chapter 7: Economy, Environment, and Famine: World War I from the Perspective of the Syrian Interior Elizabeth Williams Chapter 8: Shukru Bey and the Armenian Deportations in the Fall of 1915 Hilmar Kaiser

is an assistant professor at the Istanbul Medeniyet University, Turkey, and the author of War and State Formation in Syria (Routledge, 2014).

"...This is a very important contribution to the study of Syria in a crucial period...I definitely recommend this book and will personally use it in my reading lists about Syria." - Josef Olmert, Middle East Media and Books Reviews Online