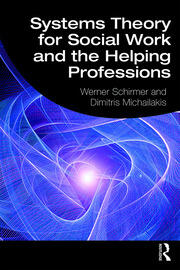 Social systems occur in many contexts of social work. This book provides an easy-to-read introduction to systems thinking for social workers who will encounter social problems in their professional practice or academic research. It offers new insights and fresh perspectives on this familiar topic and invites creative, critical, and empathetic thinking with a systems perspective.

Through introducing systems theory as a problem-oriented approach for dealing with complex interpersonal relations and social systems, this book provides a framework for studying social relations. The authors present a strand of systems theory (inspired by sociologist Niklas Luhmann) that offers innovative, surprising, and practically relevant understandings of everyday social life, inclusion/exclusion, social problems, interventions, and society in general.

should be considered essential reading for all social work students taking modules on sociology and social policy as well as students of nursing, medicine, counselling, and occupational health and therapy.

Werner Schirmer, PhD, holds a docent title in sociology from Uppsala University. He has worked at several universities in Germany, Sweden, the USA, and Belgium. Currently, he is working at the department of Sociology at the Vrije Universiteit Brussel, research group TOR. Schirmer has written several articles and book chapters applying systems theoretical thinking to topics such as interethnic relations, social work and social problems, inclusion/exclusion, respect and tolerance, international relations, priority setting in healthcare, and loneliness among older people. His current research focuses on the impact of digital technologies on social relations.

, PhD, is Professor of Sociology and Chair Professor of Social Work. He is the author of several books and reports for national and international organisations. In his research, he mainly highlights two strongly correlated areas. The first area is political governance, with particular emphasis on how the welfare state has tried to control other social systems to become more responsive towards vulnerable groups. The second area is about modern society's strongest conflict, namely the one between a fundamental right to inclusion and a steadily increasing exclusion.