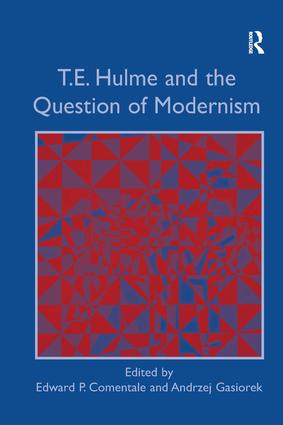 T.E. Hulme and the Question of Modernism

Though only 34 years old at the time of his death in 1917, T.E. Hulme had already taken his place at the center of pre-war London's advanced intellectual circles. His work as poet, critic, philosopher, aesthetician, and political theorist helped define several major aesthetic and political movements, including imagism and Vorticism. Despite his influence, however, the man T.S. Eliot described as 'classical, reactionary, and revolutionary' has until very recently been neglected by scholars, and T.E. Hulme and the Question of Modernism is the first essay collection to offer an in-depth exploration of Hulme's thought. While each essay highlights a different aspect of Hulme's work on the overlapping discourses of aesthetics, politics, and philosophy, taken together they demonstrate a shared belief in Hulme's decisive importance to the emergence of modernism and to the many categories that still govern our thinking about it. In addition to the editors, contributors include Todd Avery, Rebecca Beasley, C.D. Blanton, Helen Carr, Paul Edwards, Lee Garver, Jesse Matz, Alan Munton, and Andrew Thacker.

'T.E. Hulme has tended to be sidelined in most accounts of literary Modernism. This collection of lively and absorbing essays returns him to center stage, exploring the range and vitality of his concerns as a subtle register of the inconsistencies and paradoxes of a Modernism more widely conceived.' Peter Nicholls, University of Sussex, author of Modernisms: A Literary Guide ’The valuable, well-researched contributions of Rebecca Beasley and Alan Munton offer substantial, new material on Hulme's forays into early-twentieth-century art criticism.’ English Literature in Transition

Edward P. Comentale is Associate Professor of Literature at Indiana University-Bloomington, USA. He is the author of Modernism, Cultural Production, and the British Avant-Garde (2004) and the co-editor of Ian Fleming and James Bond: The Cultural Politics of 007 (2005). Andrzej Gasiorek is Reader in Twentieth-Century English Literature at the University of Birmingham, UK. He is the author of Post-War British Fiction: Realism and After (1995); Wyndham Lewis and Modernism (2004); and J. G. Ballard (2005).