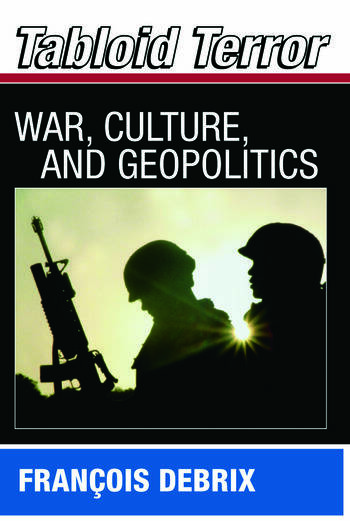 This book analyzes the methods, effects, and mechanisms by which international relations reach the US citizen. Deftly dissecting the interrelationships of national identity formation, corporate ‘news and opinion’ dissemination, and the quasi-academic apparatus of war justification - focusing on the Bush administration's exploitation of the fear and insecurity caused by 9/11 and how this has manifested itself in the US media (especially the tabloid populist media). Debrix explains how all serve to defend and produce state power and develops a model of tabloidized international relations, where responses are both organized by, and supportive of, a strong centralized US government. The field of International Relations sorely needs such analytics, in so far as it explains how people in their everyday lives relate to transnational issues.

Introduction: From Images of Terror to Tabloid Geopolitics  1. Cyberterror and Media-Induced Fears: The Tabloid Production of Emergency Culture  2. Tabloid Realism and the Reconstruction of American Security Culture before 9/11  3. Discourses of War, Geographies of Abjection: American Intellectuals of Statecraft and the Avenging of 9/11  4. The United States and the War Machine: Proliferating Insecurity, Terror, and Agony after the Invasion of Iraq  5. The Sublime Spectatorship of the Iraq War: America’s Tabloid Aesthetics of Violence and the Erasure of the Event.  Conclusion: Tabloid Terror and Precarious Lives

'This collection of essays on the tabloidization of the war on terror is analytically sharp, politically nuanced, and consistently well written. It deserves a wide audience within the policy-interested public as well as within academia.' - Michael Shapiro, University of Hawaii at Manoa, USA

'In this compelling volume Francois Debrix investigates at length the discourses now used by journalists, think tank intellectuals, foreign policy writers, and talk show hosts to represent the world as a threatening place 'in need' of American military violence. This volume is both a valuable contribution to contemporary thinking about media and war, and simultaneously a powerful critique of the practices that legitimize geopolitical violence. In lucid prose Debrix reasserts the importance of using critical social and political theory to effectively tackle matters of geopolitics, identity and warfare. This very timely book deserves a wide readership wherever citizens and scholars are concerned with violence and war, and how their contemporary justifications are shaping culture in so many places.' - Simon Dalby, Carleton University, Canada

'This critical analysis explores the discursive formations and political alliances emerging from tabloid news and entertainment programming in the U.S.A after September 11, 2001.  For Debrix, the  geopolitical worldviews of both elite decision-makers and mass publics now largely swirls through turbulent flow of media images.  Instead of rational discourse,  this re-mediated tabloid imagery simultaneously makes and maps the world as spaces where panics, conflict, anxieties, and disaster threaten everyone.  Integrating ideas from media studies, international affairs, global studies, and moral philosophy, this engaging narrative is a challenging look at post-Cold War politics.' - Timothy W. Luke, Virginia Polytechnic Institute and State University, USA