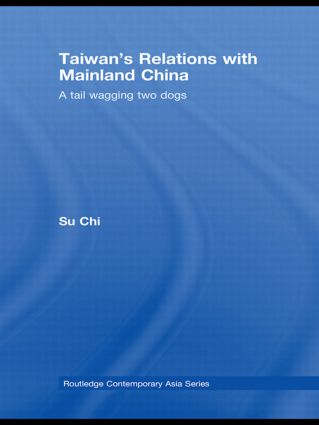 Taiwan's Relations with Mainland China is the first book to deal with the role of Taiwan’s leadership politics, including the personal political styles of Lee Teng-hui and Chen Shui-bian, in the development of Taiwan’s mainland policy and the consequences for U.S.-Taiwan relations.

Including analysis of the critical and volatile 1988-2004 period, the Taiwan Straits crisis and cross-strait tension associated with the 2004 Taiwan presidential campaign, Su Chi weaves in his personal participation in Taiwan policy making during critical periods in Taiwan’s diplomatic history to provide insight and information on cross-strait relations that is not available elsewhere

As a study of Taiwan’s mainland and US policy this will be a fascinating read for students and scholars of Taiwan Politics, Chinese Foreign Policy and East Asian Security studies alike.

'Su offers not only a first-hand account of Taiwan’s relationship with mainland China, but also a sensible analysis of one of the most complicated relationships of our times' - Survival 2009

'It is a rigorous study by a perceptive mind analyzing events in which the author played a major part. The book would be useful alone for the wealth of the first-hand information, but since Su, as a chief advisor on national security, now has the ear of the president, it is invaluable as a window on the rationale of the ruling party's approach to cross-strait relations.' - Robert Green, Taiwan Review, March 2009

Su Chi is currently Secretary-General of National Security Council, Taiwan. Prior to this was a Legislator in Taiwan’s Legislative Yuan and the Chairman of its National Defense Committee and formerly taught full-time at Chengchi University and Tamkang University. Between 1993-2000 he served in the ROC Government as cabinet- level Chairman of Mainland Affairs Council and Deputy Secretary-General of the President’s Office.