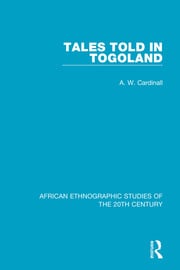 Originally published in 1931, this book collects tales told to the author by agricultural labourers and hunters in what was Togoland in the 1920s. A rare and valuable resource of oral history, the book also contains the history of the Dagomba from Northern Ghana.

2. Of the Origin of Things

3. Which Chiefly concerns the Sons of God

4. Which deals with the Pixie-folk and their Ways

5. Hunters and some of their Lore

7. Which Tells how Anansi became a Spider

8. Wherein We Learn that the Simplest of Things May have the most Elaborate Causes

9. Which Deals with Friendship, True and False

10. Wherein Men Learn Consolation in Adversity and are Warned Against Women

11. Which Deals with Matters of History