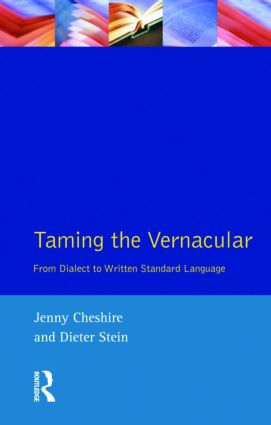 Taming the Vernacular: From Dialect to Written Standard Language examines the differences between 'standard' and 'nonstandard' varieties of several different languages. Not only are some of the best-known languages of Europe represented here, but also some that have been less well-researched in the past.

The chapters address the syntax of Dutch, English, French, Finnish, Galician, German and Spanish. For these languages, and many others, it is the standard varieties on which the most extensive syntactic research has been carried out, with the result that very little is known about the syntax of their dialects or the spoken colloquial varieties.

The editors of this volume seek to redress the balance by taking a cross-linguistic perspective on the historical development of the standardised varieties. This allows them to identify some common characteristics of spoken language. It also helps the reader to understand the kinds of filtering processes that are involved in standardization, which result in the syntax of spoken colloquial language being different from the syntax of the standard varieties.

Taming the Vernacular: From Dialect to Written Standard Language is suitable for undergraduate and postgraduate students of Linguistics, particularly those taking courses in sociolinguistics, dialectology, and historical linguistics. The focus on a variety of languages also makes this text suitable for students studying courses which cover the linguistic aspects of European languages.

1. The syntax of spoken language

4. Into and out of the standard language: the particle ni in Finnish

5. Involvement in 'standard' and 'nonstandard' English

6. This, that, yon: on 'three-dimensional' systems

7. Grammatical variation and the avoidance of stress clashes in Northern Low German

8. Norms made easy: case marking with modal verbs in Finnish

9. Articles and number in oral or close-to-oral varieties

10. Proscribed collocations with shall and will: the eighteenth century (non-) standard reassessed

11. The genitives of the relative pronouns in present-day English

12. 'Ah'm going for to give youse a story today': remarks on second plural pronouns in Englishes

15. Dialect variation as a consequence of standardization

16. The atternings of nonstandard syntax in German