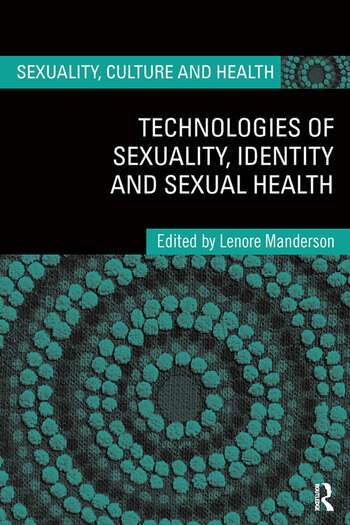 Technologies of Sexuality, Identity and Sexual Health highlights the complex ways in which sexuality is expressed and enacted through local ideologies, global identities and material cultures, and their influence on people’s sexual health and well-being. Its impetus is the renewed interest in technology and the ‘social life of things,’ including pharmaceuticals, expanded sexual and related surgery, the growing exploitation of markets for sexual and contraceptive products, and the impact of these on sexual and health practices and outcomes.

Organised loosely into three parts, the opening chapters concentrate on female contraception, its availability, and the varied cultural significance attached to the ability to control its use, exploring the politics of reproductive health and birth control, and the ties between technology and power. The middle section turns its attention to men, and the impact of traditional and contemporary concerns about masculinity, and the social and sexual roles of men. The final chapters look at the commonalities across cultural borders and sexual gendered identities – how products and procedures travel, not only through the formal channels of globalisation, but also informally, carried by individuals across cultural and social boundaries through sexual, social and commercial interactions.

The volume brings together anthropologists, sociologists and cultural studies scholars, both senior and emerging, from around the globe. Offering an important and topical contribution to the developing global literature on sexuality, sexual identity, culture and health, it is of interest to researchers and advanced students in these areas.

Lenore Manderson is an inaugural Australian Research Council Federation Fellow and Professor of Medical Anthropology in the School of Psychology and Psychiatry, Faculty of Medicine, Nursing and Health Sciences, and the School of Political and Social Inquiry, Faculty of Arts, at Monash University, Australia. She was President of the International Association for the Study of Sexuality, Culture and Society (ISAACS 2001–2003), and is Editor of the international journal Medical Anthropology (2010–present).

‘Lenore Manderson and her collaborators make a vital and important contribution to the increasingly vibrant field of sexuality. The book shows how sex is a serious business in original and creative analyses of how technologies produce power. From a vast range of experience and knowledge, the chapters contribute highly innovative cultural and political studies on sexuality, sexual health and sexual and gender identity. A must read for all those engaged in the study of the body and its discontents.’ – Wendy Harcourt, Senior Lecturer, International Institute of Social Studies, the Netherlands