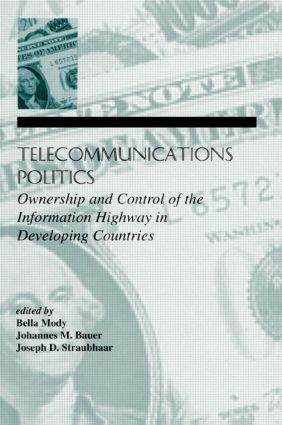 Ownership and Control of the information Highway in Developing Countries, 1st Edition

This volume brings together scholars and policymakers to address the issue of telecommunications policy in developing countries. It elaborates on the position that economics and technology determine the framework for discussion, but politics makes the decision. Politics, in this case, refers to the dynamics of the power structure generated by the historical and contemporary context of state, social, economic, and cultural forces. The chapter authors address the system of information transportation -- the telecommunications sector in developing countries ranging from low-income countries with overburdened, rural roads in south Asia and Africa trying to catch up to digitalized fibre-optic superhighways in middle income countries such as Singapore.

The organization of the book reflects a contextually situated intellectual viewpoint. The first part presents a historical and conceptual introduction to changes in the organization of telecommunications. The second part analyzes the major external and internal forces that have influenced the process of private sector participation in telecommunications. The third part offers ten comparative country case studies that provide evidence of the diverse conditions, goals, and processes of the realignment of public and private tasks in the telecommunications industry. Finally, contributors address the issue of regulation from differing positions -- a pragmatic, "how-to-cope" discussion for developing country decision makers.

The diverse perspectives in this volume should provide help to developing countries in their struggle with proposals received from international banks, private investors, interested "big powers," and their consulting firms.

"…a good book with interesting global dimensions and perspectives on the politics of financing telecommunications."