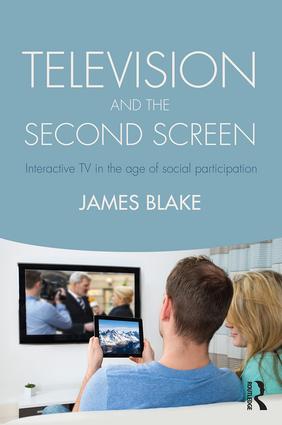 Television and the Second Screen

Interactive TV in the age of social participation, 1st Edition

Television is changing almost beyond recognition. In the battle for consumers, social media sites, smart phones and tablets have become rivals to traditional linear TV. However, audiences and producers are also embracing mobile platforms to enhance TV viewing itself. This book examines the emerging phenomenon of the second screen: where users are increasingly engaging with content on two screens concurrently. The practice is transforming television into an interactive, participatory and social experience.

James Blake examines interactive television from three crucial angles: audience motivation and agency, advances in TV production and the monetisation of second screen content. He also tracks its evolution by bringing together interviews with more than 25 television industry professionals - across the major UK channels - including commissioning editors, digital directors, producers and advertising executives. These reveal the successes and failures of recent experiments and the innovations in second screen projects.

As the second screen becomes second nature for viewers and producers, the risks and opportunities for the future of television are slowly beginning to emerge. Television and the Second Screen will offer students and scholars of television theory, industry professionals and anyone with an abiding interest in television and technology, an accessible and illuminating guide to this important cultural shift.

1. The evolution of interactive TV

4. Participating in the news agenda

8. Advertising: "Disruption is at a maximum!"

9. The future for social participation in TV

James Blake is the Director of the Centre for Media and Culture at Edinburgh Napier University where he’s a senior lecturer in TV and journalism. He spent more than 15 years in the TV industry and still works regularly for Channel 4 News and STV.