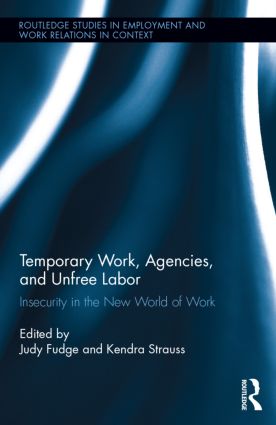 Insecurity in the New World of Work, 1st Edition

Unfree labor has not disappeared from advanced capitalist economies. In this sense the debates among and between Marxist and orthodox economic historians about the incompatibility of capitalism and unfree labor are moot: the International Labour Organisation has identified forced, coerced, and unfree labor as a contemporary issue of global concern. Previously hidden forms of unfree labor have emerged in parallel with several other well-documented trends affecting labor conditions, rights, and modes of regulation. These evolving types of unfree labor include the increasing normalization of contingent work (and, by extension, the undermining of the standard contract of employment), and an increase in labor intermediation. The normative, political, and numerical rise of temporary employment agencies in many countries in the last three decades is indicative of these trends.

It is in the context of this rapidly changing landscape that this book consolidates and expands on research designed to understand new institutions for work in the global era. This edited collection provides a theoretical and empirical exploration of the links between unfree labor, intermediation, and modes of regulation, with particular focus on the evolving institutional forms and political-economic contexts that have been implicated in, and shaped by, the ascendency of temp agencies. What is distinctive about this collection is this bi-focal lens: it makes a substantial theoretical contribution by linking disparate literatures on, and debates about, the co-evolution of contingent work and unfree labor, new forms of labor intermediation, and different regulatory approaches; but it further lays the foundation for this theory in a series of empirically rich and geographically diverse case studies. This integrative approach is grounded in a cross-national comparative framework, using this approach as the basis for assessing how, and to what extent, temporary agency work can be considered unfree wage labor

Kendra Strauss is a University Lecturer in Human Geography and Fellow of Robinson College, University of Cambridge. She is an feminist economic geographer with interests in labor market change, feminist political economy, and geographies of risk and welfare.

Judy Fudge is the Lansdowne Chair in Law at the University of Victoria, Canada.

Routledge Studies in Employment and Work Relations in Context

The aim of the Employment and Work Relations in Context Series is to address questions relating to the evolving patterns and politics of work, employment, management and industrial relations. There is a concern to trace out the ways in which wider policy-making, especially by national governments and transnational corporations, impinges upon specific workplaces, occupations, labour markets, localities and regions. This invites attention to developments at an international level, marking out patterns of globalization, state policy and practices in the context of globalization and the impact of these processes on labour. A particular feature of the series is the consideration of forms of worker and citizen organization and mobilization. The studies address major analytical and policy issues through case study and comparative research.