Terror in Our Time 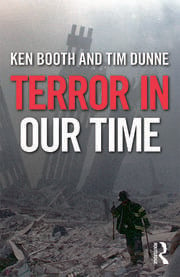 Terror in Our Time

Written by two leading scholars, this book is an accessible overview of the global political consequences of the 9/11 terror attacks.

The War on Terror has defined the first decade of this century. It has been marked by the deaths of thousands of people, political turmoil, massive destruction, and intense fear. Regardless of the name it goes under, the long war on terror will continue to affect lives across the world. Its catalyst, 9/11, did not have to happen, nor did the character of the responses. This book offers a set of novel interpretations of how we got here, where we are, and where we should be heading. It is organised around twelve penetrating and readable essays, full of novel interpretations and succinct summaries of complex ideas and events. In their examination of those aspects of global order touched by terror, the authors argue that the dangers of international terrorism are not overblown. Future 9/11s are possible: so is a more just and law-governed world. Terrorism cannot be disinvented, but with more intelligent policies than have been on show these past ten years, it can be overcome and made politically anachronistic.

This book will be essential reading for all students of terrorism studies, international security, war and conflict studies and IR in general, as well as of much interest to well-informed lay readers.

Ken Booth is Senior Research Associate in the Department of International Politics, Aberystwyth University, where he was previously EH Carr Professor and Head of Department. He is a Fellow of the British Academy and Editor of the journal International Relations. Among his many books are Theory of World Security (2007) and the edited volume Realism and World Politics (Routledge 2011).

'This co-authored book offers wise insights on terrorism and security since the 9/11 Al-Qaeda attacks. The calm analysis and broad reach of the book combine to generate a clear voice within a cacophonous field. Terror in our time provides a refreshing overview of world events related to the evolution of terrorism and counterterrorism over the past ten years.' -- Audrey Kurth Cronin, International Affairs, September 2011

“Black and white have been the colors used to depict the ‘war on terror’ and characterize the debate about its pluses and minuses. Booth and Dunne push the reader to consider a different palette, the various shades of grey necessary to understand the ten years that shook the world since 9/11. It is essential reading.” - Thomas G. Weiss, The Graduate Center, City University of New York

“Booth and Dunne have written a very wise book, one that deserves to be read not just by academic specialists, but also by interested members of the public and, I hope, by our leading commentators and political elite. This is a magisterial analysis of the post-9/11 decade, and I strongly recommend it to anyone interested in this most pressing problem of our time.” - Sir Steve Smith, University of Exeter, UK

“Booth and Dunne have given us what is sorely needed in the study of terror--perspective, calm reflection, and mature analysis. Straightforward without over-simplifying, persuasive without hectoring, their book is an invitation to think and talk more mindfully.” - Robert Jervis, Columbia University

''Terror in our Time is an engaging contribution to the heated debate on the significance of the post-9/11 decade.  It strides into the controversies, armed with both a scholarly sensibility and a willingness to engage in controversy.  Booth and Dunne diagnose the meaning of the 9/11 attacks in their wider context and weigh the problematic responses that followed in the decade after.  Their persuasive message is sober and hopeful: international terror is something the world will not eliminate, but can contain." - Michael Doyle, Columbia University

‘"Terrorism" is a word often used but rarely defined.  In a wide-ranging study, Booth and Dunne define the term and seek to explain the significance of the struggles over terrorism in the decade since the attacks of 9/11/01.’ - Robert O. Keohane, Princeton University

'Ken Booth and Tim Dunne have teamed to write a comprehensive, judicious, perceptive, and sophisticated study of terrorism and its responses during the decade following the 9/11 attacks. No thinking person should pass up this profound and compelling study of terrorism in our time that somehow manages all at once to be empathetic, impressively informed, and analytically lucid. A wonderful contribution to public discourse.' -- Richard Falk, Princeton University